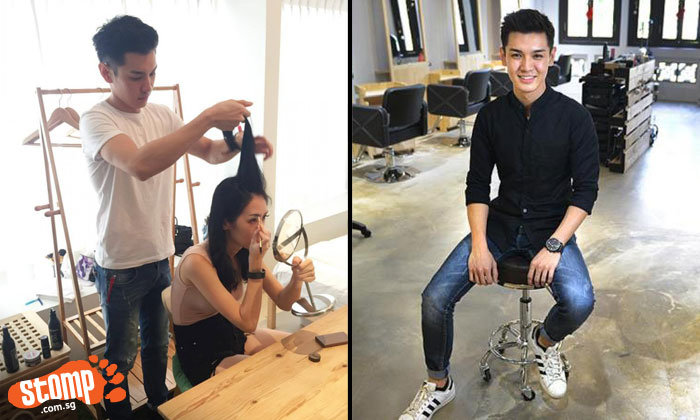 If you are of the impression that ITE stands for 'it's the end' instead of Institute of Technical Education, you might want to think again after seeing the achievements of salon owner Noel Ng.

The 25-year-old received a National ITE Certificate (Nitec) in Hair Fashion and Design from ITE College East in 2010.

He could have gone on to sit for 'O' Levels after completing his 'N' Levels in Secondary 4, but chose to enroll into ITE as he preferred a skills-based curriculum.

In ITE, Noel was equipped with both theoretical knowledge and technical skills about hair fashion and design.

He excelled in his course, and was even selected to represent Singapore twice in international competitions.

In 2010, the charming stylist bagged a gold medal for hair dressing at the 8th Asean Skills Competition in Thailand.

A year later, he received a medallion for excellence in hairstyling and haircare during the WorldSkills competition held in London. The prestigious biennial event showcases young people's skills in various crafts and measures them against international standards.

Then in 2012, Noel received a second Nitec in Hair and Scalp Therapy.

Pursuing a future in hairdressing however did come with its challenges. Noel told Stomp in an interview:

"Then I was really young. I didn’t have much of an idea of what I could achieve.

"Also my parents weren't very supportive then. It was just basically all by myself."

That however did not deter Noel from doing what he loved.

After leaving school and completing his national service, Noel opened Harts Salon in November 2016 at Tan Quee Lan Street with his aunty who is also a hairdresser.

He is currently a director at the salon and utilises the skills he picked up in school as well as his stints at previous internships to meet the requests of his customers.

Surprisingly, Noel revealed that being a good hairdresser is not just about mastering hairstyles and perfecting technique.

"To me, it’s also about the personal relationships you build through interaction with your customers. Not many people understand that.

"If you build up rapport with customers, they will return back to your salon."

Noel also shared other interesting snippets of his profession and showed off his skills in hairstyling in a sleek demonstration. Have a look at them in the videos below.

Click here to find out more about Harts Salon or how to go about making an appointment.

Related Stories
Realife: My life fell apart after my 3 dogs died -- but it all changed when I started animal work to honour them
Former convict finds new purpose in life through busking
inspiring
ITE
creative
hairstyle
handsome
talented