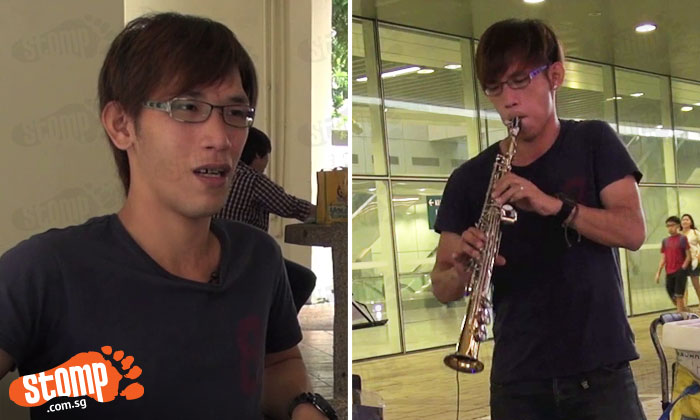 There is a common misconception that buskers are homeless or unemployed bums.

That may be true for some but there are many who choose to busk for a living.

Steven Goh, 31, is one of those people who chose to take the path less travelled simply because of his immense love for music.

"I love music. I have tried to play several instruments in the past including the drums, the trumpet and guitar but I fell in love with the saxophone."

Steven's connection with the saxophone began in an unlikely place.

"I learnt how to play the saxophone in a funeral band," he shared.

Without any prior exposure to music, Steven learnt his Do, Re and Mi from the uncles he was in the funeral band with.

From there, he scrimped and saved before he spent $1,000 on his most prized possession.

Proud to be self-taught, Steven's passion for music spurred him to practice all day and night to master the saxophone.

He even learnt how to write and read musical notes himself.

When asked who his inspiration is, Steven said with a grin on his face, "Kenny G".

He cites Titanic and Forever in Love as his favourite tunes and says he never grows tired of playing these scores during his performances.

Although many see busking as a form of begging, for Steven it is a legitimate career.

With the highs, come the lows and Steven says he can earn $20 on a bad day, but will never earn nothing.

At the end of the day though, he does this all for his family.

Speaking about his past, the single father said that he had a terrible temper and got up to plenty of mischief when he was younger.

At 28, he went to jail for theft and served a nine month sentence.

However, he has now ditched his wayward friends and is very much a family man.

"With busking, I can have time for my family while also giving them a good life. I also get to do what I love."

Check out Steven's story and performance of Kenny G's Forever in Love in the videos below.