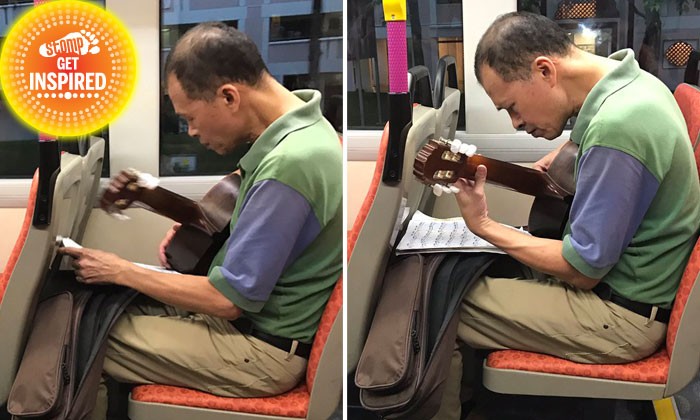 It is never too old to learn or relearn a skill which makes you happy.

That is something an elderly man, who was riding on bus number 190, taught many people when he was squinting at musical notes and trying to play a guitar.

Rusydi was riding on the same bus from Choa Chu Kang at 7.30pm two days ago (Feb 13) when 15 minutes into the ride, he heard pluckings of a guitar.

He turned to his right and there the elderly was, strumming intently which made Rushdi paused his own music, took off his earpiece and listen to the elderly practising.

He said, "Uncle got skills especially for his age. I saw his fingers changing from note to note like water flowing down the river.

"The photos should inspire those out there who are already giving up on learning at a very young age because if this Uncle is still learning, others should not have any excuse."

Rushydi took the photos and posted them on Twitter which generated more than 4,986 retweets and 3,051 likes.

However, he feels that those who responded by saying the elderly should not even be playing the instrument in the bus is being too negative.