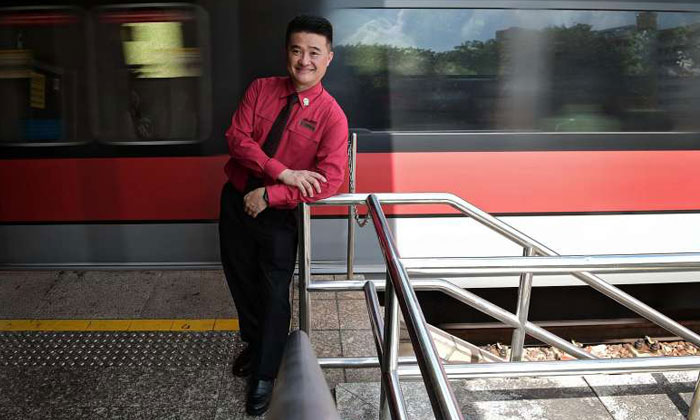 During a train service disruption on the North-South Line on Jan 9, in which commuters were forced to get off the train, train captain Goh Kim Han's primary concern was guiding passengers to the nearest station safely.

As commuters cautiously picked their way over the tracks towards Marsiling Station, Mr Goh, 51, noticed an elderly man struggling to navigate the uneven surface. Rather than risk the man falling, he immediately approached the man and offered him a piggy-back to the station platform.

Mr Goh's small act of kindness drew the attention of local media and later earned him an Outstanding Award at the National Kindness Award - Transport Gold.

The train captain was one of 25 public transport sector personnel to receive an Outstanding Award at the 17th edition of the ceremony on Wednesday (Oct 26). A total of 419 service staff received commendation awards in recognition of their exemplary service.

Jointly organised by the Singapore Kindness Movement, Land Transport Authority (LTA) as well as public transport companies and associations, the ceremony recognises service staff who consistently provide excellent service and go the extra mile in the course of their work. It also seeks to promote gracious behaviour in the public transport industry.

Said Dr William Wan, general secretary of the Singapore Kindness Movement: "Millions of trips are made on our public transport every day, made possible and enjoyable by our dedicated frontline service and backend support staff. We are very pleased to recognise those who have gone beyond the call of duty for their passengers. Their heartwarming stories show that as long as one makes an effort to reach out to someone with kindness, it can make a huge difference."

The award recipients were picked from five categories - bus operations, taxi operations, rail operations, automotive and engineering, as well as customer service and all other support functions. A total of five winners from each of the five categories were selected by a panel of judges for the Outstanding Awards.

Dr Wan noted that every year, there has been a rise in the number of nominations and the number of people who are given the award.

"That goes to show...that this idea of kindness breeding kindness and graciousness multiplying itself is actually working. When people see their own colleagues being praised, awarded and recognised, I think others would also like to do the same."