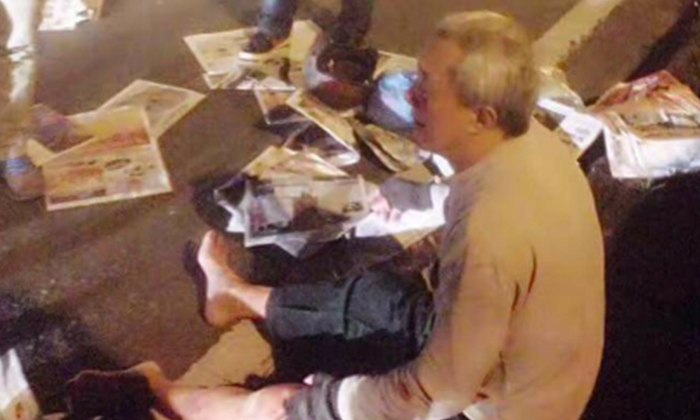 After the accident, the vehicle sped off, leaving the man injured by the roadside.

Despite Zhen’s offer to take him to a hospital to seek medical attention, the elderly man was adamant about completing his rounds first.

“We wanted to send the elderly uncle to the hospital to have his wounds cleaned, but he insisted on not going.

“He said he couldn’t because it was the first day of 2017, and he didn’t want houses who awaiting their first paper of the year to be disappointed.”

Zhen ended her post by criticising the errant driver:

“All I want to say is, hitting an elderly man and getting him injured, yet not even stopping your car to check… how do you live with yourself?”

Unfortunately, Zhen did not manage to see the number plate of the car, as her view was obstructed by two other vehicles in front of her own vehicle, but she adds that the vehicle immediately after the perpetrator's may have seen it.

The incident has caused a ruckus online, and many netizens have praised the elderly newspaper delivery uncle for his professionalism, while condemning the irresponsible driver.

“What a respectable character!

“I honestly salute this newspaper uncle.

“Here’s to wishing him a speedy recovery!”