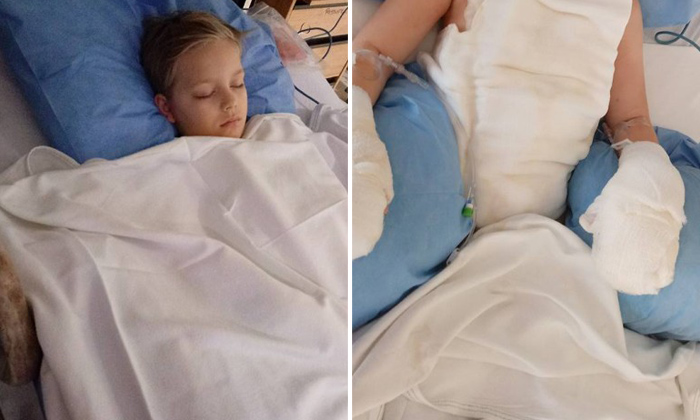 If you play with fire, you will get burnt but throw in a hand sanitiser and what happens?

One 8-year-old boy in Boston in the United States suffered second-degree burns on his body after he re-created a stunt he had watched on YouTube with his cousin and older brother.

According to Washington Post, James Ditucci had his cousin over for a sleepover last Monday (Jan 16). After Ditucci's mother had put them to bed, the boys decided to pull off the stunt.

The stunt shown on YouTube involves dipping one's fingertips into a pool of hand sanitiser before lighting them on fire.

Forbes reported that these videos are seen as "safe methods" to avoid burning your hands, but only if you handle the flaming gel for a few tenths of a second.

But unfortunately for Ditucci, it was not his fingertips but his shirt which also soaked up the hand sanitiser and within seconds, his clothes were ablaze.

Ditucci's mother, Tashia Ditucci, said: "I heard just god-awful, blood-curdling cries and screams. My son came downstairs, and he was just really red, and you could see burns all over him."

Although his older brother and cousin were quick in helping him to extinguish the flames, Ditucci suffered second-degree burns to his hands, chest and thigh.

According to Washington Post, about 15 per cent of his body was hurt. He is now recuperating at Shriners Hospitals for Children, a medical centre in Boston.

Mrs Ditucci took to her own Facebook page to send warnings to prevent such incidents from happening.

In a post dated Jan 16, she criticised the videos for the danger they bring to children who emulate the stunts.

"Please keep praying for my boy...He's in a lot of pain," she added.