Toddler badly burnt by hot oil: Family has spent over $10,000 on surgery 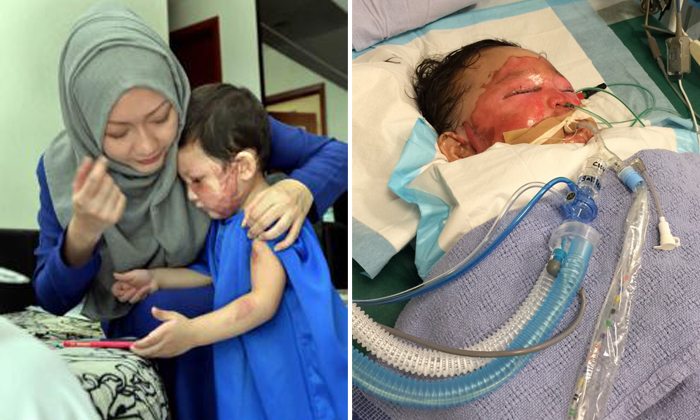 It was not a happy Ramadan last year for Madam Mashitah Abdullah, who had to face a neverending stream of questions from people about the misfortune that befell her son, Aafaa Zuhayr Muhammad Al-Khair.

Aafaa, 2, was badly hurt in an accident in June last year when he was scalded by hot oil after he had accidentally tipped over a hot frying pan in the kitchen.

The then-15-month-old toddler suffered second degreee burns when the sizzling oil splashed on his face and trickled down his body and arms.

This year however, Madam Mashitah is much more thankful after seeing the progress made by her only child. Although large scars are still visible on his face, she and her husband, Mr Muhammad Al-Khair, are confident that Aafaa will make a full recovery.

"After the incident, I never imagined that I would receive messages of encouragement from other mothers around the world, including Iceland, whose children had undergone even worse ordeals than my son," she told Berita Harian.

Ms Farzana Abdul Razak, a former stewardess who suffered severe burns in the SQ006 incident, also assured her that her son would recover in time, Berita Harian reported.

Other than the scars, Aafaa has also been traumatised by the accident in other ways. According to Madam Mashitah, he is more subdued and will sometimes suddenly burst into tears because of the itchiness caused by his scars.

"There are times when he seems afraid when we want to bring him out of the house. Perhaps he thinks we might bring him to the hospital again," she said.

Since the accident, Aafaa has been through a number of operations in South Korea. Madam Mashitah said that she found out about Hangangsoo Hospital while watching a programme on Korean TV channel KBS World.

She recalled facing a number of challenges when she first visited the hospital. The doctors and nurses did not speak or understand English, and even though there was an interpreter, many of the explanations were still unclear.

"But my mother's instinct told me that Aafaa should undergo surgery at the hospital," she said. To her relief, he soon began to show improvements.

So far the costs of the operations have come up to more than $10,000, and this is before factoring in costs of flights and accommodation in South Korea, Berita Harian reported.

Madam Mashitah now takes care of Aafaa full-time. She quit her previous job as a marketing manager, and is now selling Magic Jelly, a product containing aloe vera that she rubs on her son's face a couple of times a day.

But what has taken her most by surprise is how she has become a source of support to other mothers whose children have also been badly burnt.

She revealed that she once received a message on Facebook from a woman in India, who was seeking her advice. The woman's child had also been burnt after toppling over a rice cooker.

"The most important lesson I have learnt from this incident is that as a mother, we must strengthen our resolve and be brave, especially when our children have to undergo surgery. If we are scared, then they become scared as well, which hinders their recovery," she shared with Berita Harian.

At Hari Raya this year, Madam Mashitah plans to visit her family and relatives at night or when it rains, because exposure to the sun can exacerbate the itchiness felt by Aafaa from his scars.

"I am just thankful to everyone, including those whom I do not personally know, who have showed concern for my son and prayed for his quick recovery," she added while shedding a tear.