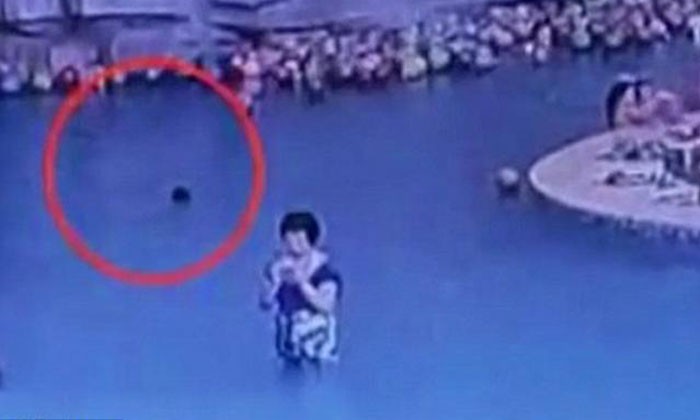 A mother didn't realise her son was drowning even though they were only 2m away from each other in a swimming pool in China.

Why? She was too transfixed on her mobile phone while her helpless four-year-old boy was struggling in the water.

The tragic incident on Tuesday (Jan 3) at a pool inside the Ocean Spring Resort in Xianyang city was captured by a CCTV camera.

When the mother was done with her phone, she realised her son had disappeared and sought the help of pool staff to look for him.

After more than an hour of searching, her son's body was finally found at the bottom of the deeper (1.1m) end of the pool, reported thepaper.cn, citing an article in the local Hua Shang Daily.

Posted on Twitter by People's Daily, the CCTV video reveals the boy's final agonising moments when he struggled for about three minutes before drowning.

The mother, whose surname is Xiao, told Hua Shang Daily that she was only 2m away from her son when she was checking her phone.

"If I had known this would happen, I would never bring him here," said a distraught Madam Xiao.

Although local police have yet to issue a statement, state-owned travel agency HKCTS which manages the pool, shut it down to probe the matter.

Madam Xiao and her husband reportedly work in the nearby city of Xi'an.