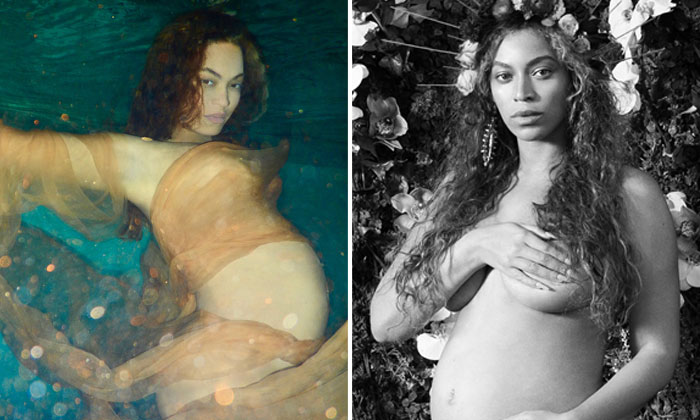 Beyoncé is full of love now she has "three hearts" inside her as she is expecting twins with her husband Jay Z and she has shared a host of photos showing off her baby bump on her website Beyonce.com.

The 35-year-old singer - who already has five-year-old daughter Blue Ivy with her husband Jay Z - publicly announced she is expecting twins on Wednesday (01.02.17), and now the R&B superstar has unveiled several adorable images of herself on her website Beyonce.com flaunting her blossoming baby bump.

The Destiny's Child star has filed the images under the caption "I have three hearts", which feature images of her sporting sheaths of wet material that cling to her curvaceous frame and expose her swelling stomach, whilst she clutches at one of her breasts and another of her showing Blue Ivy sweetly kissing her bump.

Another photo sees the 'Lemonade' hitmaker pose under water whilst she elegantly twists into various positions as red and orange fabric wrap around her body, which have been carefully positioned to ensure she doesn't expose too much flesh.

Another image shows Beyoncé posing in the nude and cradling her stomach.

Other pictures include the image the 'Dreamgirls' actress shared on her Instagram account last night of her sporting a burgundy bra, blue silk panties and a green veil, as well as pictures of her and her spouse over the years.

Beyoncé - who has been married to 'Hard Knock Life' rapper Jay Z for nine years - also shared a string of black and white images of her every month during her first pregnancy, as well as sentimental photographs of her 63-year-old mother Tina Knowles kneeling on a sandy beach when she was expecting her first daughter.

And has admitted she wonders whether her parent shared the same emotions she now feels as her brood is expanding.

One post read: "I look at photos of my mother when she was pregnant with m, does she feel how I feel now?"

Beyoncé also shared a poem about motherhood and how a woman's body changes over the nine months.

It read: "Mother is a cocoon where cells spark, limbs form, mother swells and stretched protect her child, mother has one foot in this world and one foot in the next, mother, black Venus."