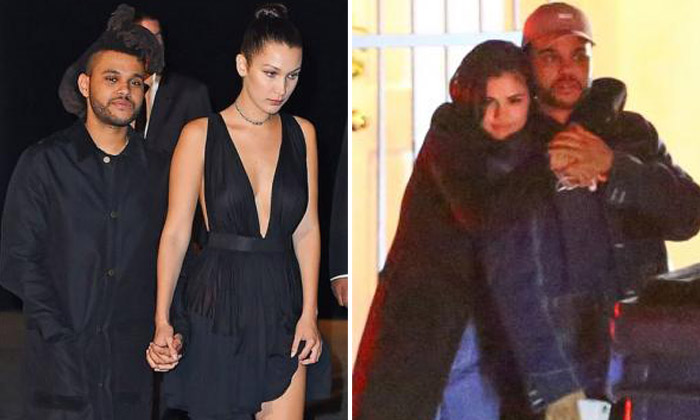 Bella Hadid is "hurt" The Weeknd has moved on with Selena Gomez.

The 20-year-old model is said to still be reeling over pictures of her ex-boyfriend - real name Abel Tesfaye - kissing the 'Heart Wants What It Wants' hitmaker.

A source shared to People magazine: "Bella and Abel's split wasn't dramatic, but of course she's hurt and p****d that he's moved on so quickly with Selena."

And the 24-year-old singer isn't too concerned about upsetting Bella.

One source said previously: "Selena was always the girl who stayed away from a lot of the Taylor Swift crew, except for Taylor. She preferred to be one-on-one with Taylor and didn't like being a part of the whole squad thing."

Whilst another added: "Selena is not good friends with either Gigi or Bella. She knows them through other people, but they are just acquaintances.

"She is friendly with them, but not friends with them ... Selena and Gigi were never fond of each other, so Selena definitely doesn't have any stipulations about hooking up with or dating Bella's ex."

And Bella reportedly still has feelings for her ex-boyfriend.

An insider revealed: "She is actually not over The Weeknd. She still loves him. They are on fine terms, but she is bitter about the romance with Selena.

"She was not happy when all of that gossip went everywhere between The Weeknd and Selena. It really hurt her seeing Selena be all up on her man. She still feels like they have a connection."

Meanwhile, it was previously claimed that the 'Can't Feel My Face' hitmaker has had a crush on Selena for some time.

A source said: "Abel though always had a thing for Selena. He thinks she is extremely talented and sexy.

"They recently started talking before the holidays but she has been on his radar before. They are on the same level with expectations and think the other is really fun. They are taking things slow and getting to know each other."