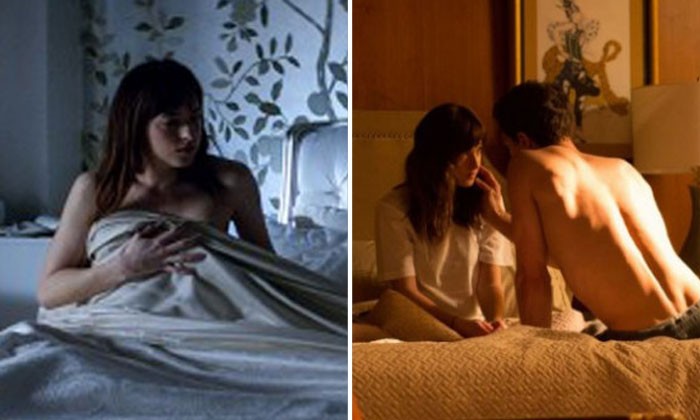 On the differences between the first and second part of the Fifty Shades trilogy, Dakota Johnson said: "In the first one, we were setting up this story and the characters.

"This is more about Anastasia's arc as a woman and her sexual journey, and her trying to figure out who she is alongside this other person, who is so steadfast in his goals.

"It is more focusing on the relationship between the two."

Fifty Shades Darker expands on events set in motion in 2015's box-office smash that collected US$85 million (S$120 million) on opening weekend in the United States and grossed more than US$571 million globally.

The new film, opening here tomorrow, was shot back to back with the third, Fifty Shades Freed, to be released next year.

Talking about the latest movie, Johnson, wearing a Shaina Mote dress in black - her favourite colour - looked like the girl next door. Not unlike her character Anastasia Steele, a virginal college girl who gets involved with a kinky billionaire, played by Jamie Dornan.

The movies are based on the best-selling books by E. L. James, whose husband, Niall Leonard, wrote the scripts. The second and third films were directed by James Foley.

Her interview skills have improved marginally since our interview last year for How To Be Single. That is not saying much, but at least she did not give the impression of not wanting to be present. Or perhaps her acting skills have just improved.

When asked to expand on her answers to British Glamour magazine on her favourite sex toys, Johnson said, laughing: "That is so inappropriate."

She added: "Doing a film where that is such a prevalent concept, you do research and I learnt as much as I could about the lifestyle. There are some really beautiful aspects. I don't have a favourite sex toy."

Working with Foley was a different experience from the first movie, which had a female director, Sam Taylor-Johnson.

She said: "He did an incredible job. The first film was perfect for what it was. The way this one was made, he was very much the right man for the job.

"It is more saturated and has more of a thriller aspect, and it is more suspenseful. It was interesting going from working so closely with a woman to working on the same material with a man. It was enlightening."