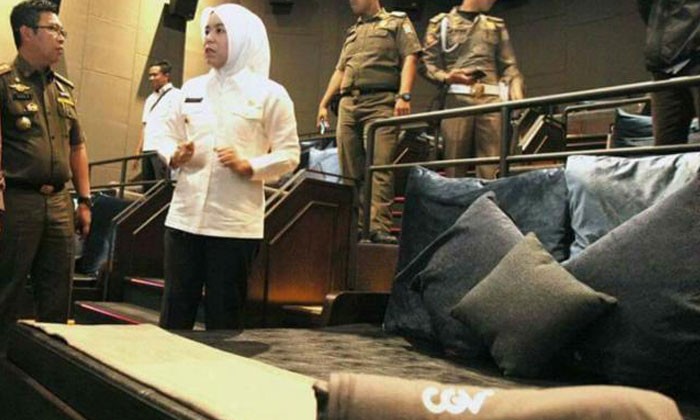 From food and cocktails to recliner seats, cinema owners have spared no efforts in chasing after wealthier customers with a penchant for the finer experiences in life.

Unfortunately for one cinema operator in Indonesia, such efforts have drawn unwanted attention and resulted in the suspension of its best screening hall.

The reason? It's plush bed-like seats were so comfortable that the authorities - ironically - became uncomfortable with them.

According to Coconuts Jakarta, the CGV cinema chain was ordered to temporarily shut its Velvet Class theatre in Palembang, after deputy mayor Fitrianti Agustinda said that the beds "could promote adultery and sexual misconduct".

Fitrianti visited the cinema at Palembang's Sosial Market shopping centre on Wednesday (Feb 3) after receiving complaints from members of the public.

She reportedly told Indonesian media that she was seeking an explanation.

She said: "If it's like this, those that don't want to watch the movie can still use it for something else."

Local media reported that she also rejected the cinema's explanation that the beds were not just meant for couples, but also for families to watch movies together.

Despite having government permission and security cameras installed, CGV has been ordered to shut its luxury theatre until the seats are changed.

CGV has operated its Velvet Class service in other parts of Indonesia without issue.