20 years later, woman reunites with man who raped her to share their story 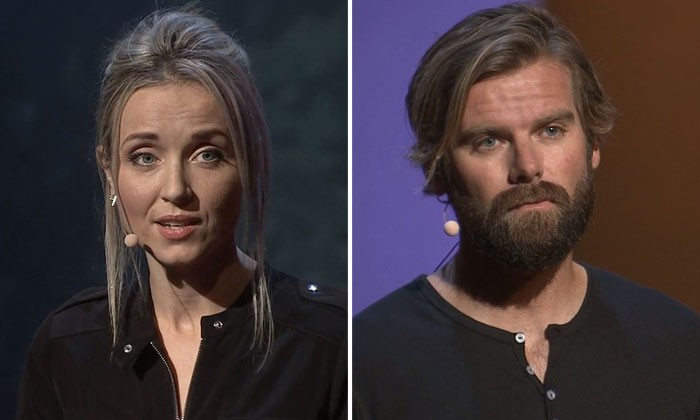 Icelandic woman Thordis Elva's brush with first love at 16 spiralled into an almost decade-long nightmare, after she was raped by her Australian exchange-student boyfriend in her home.

But incredibly, 20 years after the traumatic event, Ms Elva and the man who raped her took to the public stage to share their story.

In a Ted Women talk recorded in 2016 but posted on Facebook on Feb 7, the writer and landscape gardener Tom Stranger shared their 16-year struggle for peace and forgiveness with an audience and the world.

The pair met in 1996, when Mr Stranger, then 18, went to Iceland on an exchange programme.

They dated but their romance took a life-altering turn after a school Christmas ball, when Mr Stranger carried the tipsy teenager home and sexually assaulted her in her bed.

Said Ms Elva: "It was like a fairy tale, his strong arms around me, laying me in the safety of my bed. But the gratitude that I felt towards him soon turned to horror as he proceeded to take off my clothes and get on top of me.

"My head had cleared up, but my body was still too weak to fight back, and the pain was blinding. I thought I'd be severed in two. In order to stay sane, I silently counted the seconds on my alarm clock. And ever since that night, I've known that there are 7,200 seconds in two hours."

The pair broke up several days after the dance and never spoke about what happened, even after Mr Stranger left for Australia months later when his exchange programmed ended.

Ms Elva said despite her pain, she kept quiet about the incident as it "didn't fit my ideas about rape like I'd seen on TV. Tom wasn't an armed lunatic; he was my boyfriend. And it didn't happen in a seedy alleyway, it happened in my own bed".

And for Mr Stranger, he confessed that he had convinced himself that it was sex and not rape, "and this is a lie I've felt spine-bending guilt for."

Ms Elva added that it took her a long time to stop blaming herself for the rape.

After nine years of personal torment, Ms Elva eventually confronted her attacker by penning him a letter.

Expecting nothing in return, Ms Elva was surprised when she received a "typed confession" from Mr Stranger "full of "disarming regret". The letter led to an eight-year correspondence, culminating in their meeting face-to-face for the first time in almost 16 years.

The meeting was necessary, Ms Elva said, as their emails "didn't bring about closure for me".

For a week, they talked and searched for understanding in Cape Town, South Africa - a location decided upon as it is right in between Australia and Iceland.

Mr Stranger said through the dialogue, "the seismic effects of sexual violence were spoken aloud and felt, face to face". It also brought about "soaring clarity, and even some totally unexpected but liberating laughter".

Ms Elva, who is married with a son, said she hopes that sexual violence will no longer be treated as a "women's issue", noting that conferences she speaks at are almost exclusively attended by women.

"Just imagine all the suffering we could alleviate if we dared to face this issue together."

In a subsequent interview after the talk, Mr Stranger said they were careful not to portray his public contrition as 'heroic': "I believe owning one's past choices should be viewed as neither brave nor heroic in any way, but instead a necessary obligation and acknowledgement of individual culpability."

Related Stories
'A married man raped me when I was a virgin, so I turned to sex work to numb the pain'
Boy, 14, rapes total stranger, 16, at lift lobby: Both are of low intellect
Rape
sex
heartwarming
inspiring
sad
party