Driver parks at Yew Tee MRT station’s pick-up point on rainy day, then confronts man who honked at him 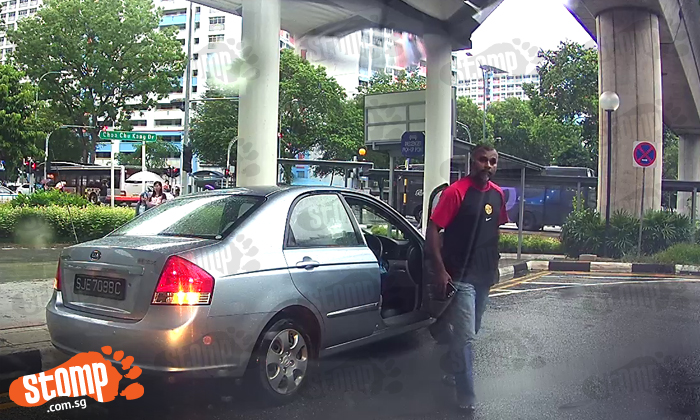 Stomper Jason was just about to drop off his wife at Yew Tee MRT station's drop-off point on Wednesday evening (Jan 25)  when he encountered a driver parking illegally along the roundabout.

In the video he submitted to Stomp, the Stomper can be heard sounding his horn at the errant driver.

After a few seconds, the driver steps out of his vehicle and walks towards the Stomper in the rain.

The Stomper can be heard shouting, "Not for waiting, for alighting. How (is) my wife going to come out?"

The driver then retorts, "What you want liddat? I waiting for my wife to come what."

In the video, no stop signs and unbroken double yellow lines can be seen along the side of the road. This means that vehicles are not allowed to be stationary, unless they are stopping to immediately pick up or drop off passengers, luggage or goods.

According to the Stomper, the errant driver returned to his vehicle after the confrontation and refused to move before his wife arrived five minutes later.

"Before driving off, he alighted from the vehicle again and said to me, 'You better watch out.'"