"Driver of TransCab SHD305E -- you endangered my life and the lives of my passengers!" 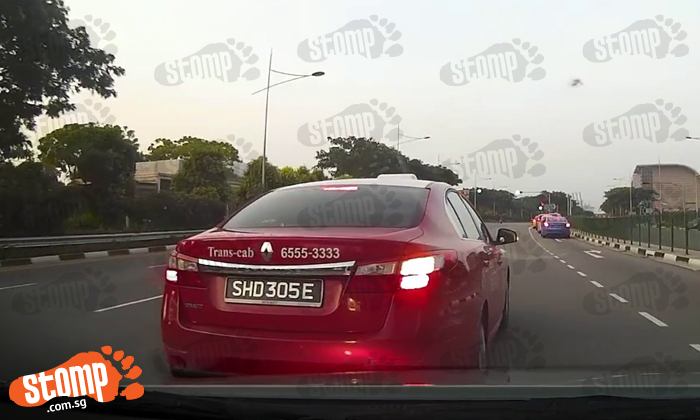 Stomper JuzAnotherVictim was driving along Sheares Avenue earlier this month (Mar 18) when she nearly got into an accident, thanks to the reckless driving of a taxi driver.

"I picked up tourists from New Delhi at Changi Airport and was bringing them to Furama RiverFront.

"I was travelling on the first lane of the four-lane road, and I was about to turn right into Sheares Link when a TransCab taxi with licence plate number SHD305E abruptly and dangerously cut into my lane, almost causing a collision.

"The taxi driver purposely applied emergency brakes to block me from entering the lane, causing me to miss my turn.

"As I drove beside him, he pointed his middle finger at me.

"He almost caused my passengers and me to lose our lives. Luckily, I was vigilant and managed to brake in time.

"My passengers were furious at the driver for his irresponsible driving. It was unfortunate that their first trip to Singapore had to begin like this.

"I think the incident also shocked his passengers because they were all holding the handle bars in the taxi.

"We are all trying to make a living. Safety is the most important thing."

The Stomper would also like to remind drivers to drive carefully and safely, and to be mindful that almost all drivers have a dashcam onboard.

Check out the video the Stomper contributed below.

Related Stories
Eh BMW driver, I give you space yet you recklessly cut into my lane
What happens when driver tries to be funny and cut into lorry's lane
Driver of Honda SKE1032U narrowly escapes collision after dangerously cutting lanes on expressway
changes lane abruptly to exit
cut lane
cab