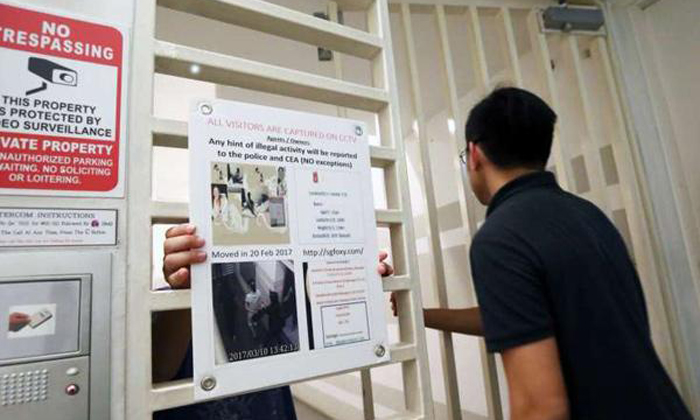 A case of a woman allegedly offering sex services in a condominium unit in Little India is being investigated by the police, thanks to three weeks' work by a neighbour who wanted to stamp out vice activities there.

The neighbour, who gave her name only as Gloria, told Shin Min Daily News in a report on Tuesday (March 14) that the woman from China moved in on Feb 20.

"She moved in in the morning. That afternoon, there were strange men who visited her, and after that even more strange men," Gloria told Shin Min.

She said the men took the lift separately and visited the woman's second-floor unit in the six-storey building.

She declined to reveal the name of the development.

The woman allegedly entertained 111 customers in the span of three weeks, with as many as 10 a day in her busiest week, said Gloria.

The visitors ranged in ages from 20s to 60s, and would visit between 11am and 3am.

"I once saw an uncle walking outside the condo," said Gloria.

"After I talked to him, he admitted he was waiting for a woman. I had heard friends say that you can use the WeChat service to get 'services', and by using WeChat's 'people nearby' feature, I found (a woman nearby) offering 'professional massage' services."

On her profile, she allegedly advertised her services and even included a website link, said Gloria.

"I clicked on the link and found out that she offered sex services, so I reported it to the police," she said.

Gloria has access to the building's closed-circuit camera television footage.

She said she checked the CCTV footage daily and wrote down 18 pages of notes on strange men who went to the second floor.

On Saturday (March 11), Gloria printed out posters explaining what the woman was doing, to warn other residents.

The woman moved out on Sunday (March 12), Gloria said.

Police confirmed with The Straits Times on Tuesday that a report was lodged, adding that investigations are ongoing.

In 2015, The New Paper reported the arrest of another woman conducting vice activities in a condominium unit, after a resident reported it to the police.

The Straits Times understands that it is the same sharp-eyed resident at the same development.