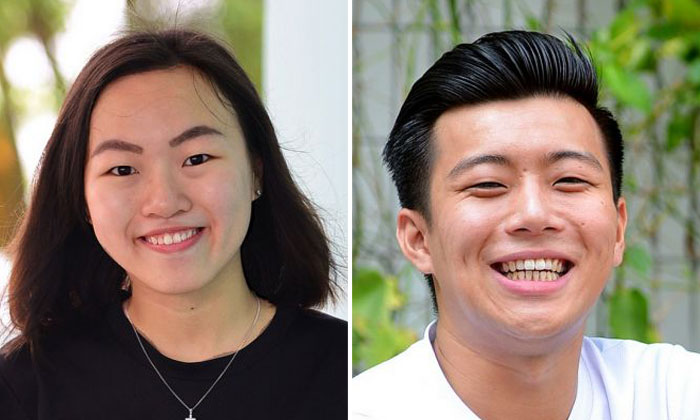 He was a gang member at 15 and ended up in boys' home. She was six when her father became a bankrupt and later suffered a brain aneurysm. But adversity toughened them up.

His detention made him vow to change while her family's hardship motivated her to excel in school.

They both ended up in Ngee Ann Polytechnic and recently received its prestigious scholarship for the third year running. These are their stories - and their love story.

Several years ago, her father was forced to sell the family home after he was declared a bankrupt when his business went bust.

A few years later, just as they were getting back on their feet, he became partially paralysed after a brain aneurysm.

Her mother had to work in a factory and as a dishwasher to support the family.

Those difficult times made Miss Amanda Tan, now 19, realise the importance of education.

Her vow to never endure such hardships again drove her to excel in her studies to clinch the prestigious Ngee Ann Polytechnic (NP) Scholarship.

She remembers having led a carefree childhood with her parents and older brother.

But in 2003, when she was six, everything changed after her father's car dealership went under because of the financial crisis.

After selling their four-room flat, the family shared her aunt's crowded flat.

Her father found work in a store and her mother worked 12-hour shifts in a factory and later as a dishwasher.

Miss Tan said: "She would get home only around 11pm. I barely saw her."

Despite their struggles, they managed to save enough money to buy a three-room flat.

"We managed to get by. After a while, we just adapted," she said.

But tragedy struck when Miss Tan was 14.

Her father woke up one morning and was unable to move half his body.

She said: "I was very scared. I was still quite young and I had to call the ambulance for him.

It turned out to be a brain aneurysm and her father was operated on immediately.

"The doctors said he had only a 50-50 chance of survival," said Miss Tan. "I kept thinking, 'Why must this happen to me?' It was very sad and scary to see my dad like that."

Her father managed to pull through and has mostly recovered. But he can no longer work because of his giddy spells.

Miss Tan used the series of adversities as her motivation to succeed in life.

She scored 12 points for her O levels and is now a business and social enterprise student at NP. She was awarded the NP Scholarship for three consecutive years.

The scholarship is given to students with good O-level results, co-curricular activities and leadership skills.

It has helped ease her financial burden as the $10,200 annual sum covers tuition fees, book allowance and a laptop allowance for freshmen.

Miss Tan, who will graduate next year, wants to be a social worker after being inspired by the medical social workers who helped her family during their dark days.

"I feel more motivated to study hard because my parents are not educated. I need to study to do well for them. I feel like I'm their only hope."

'Traumatic' detention jolted him to change

It was about how he ended up in the Singapore Boys' Home for two years for robbery when he was 15.

But he turned his life around and became a recipient of the Ngee Ann Polytechnic (NP)Scholarship, an honour reserved for all-rounded high achievers, for three years running.

Mr Yap mixed with bad company in secondary school. He smoked, took drugs and was involved in gangs.

He told TNP: "In primary school, I was bullied a lot for being plump. So in secondary school, I became the bully."

His studies suffered and he was retained in Secondary 2.

His parents fell into debt and divorced when he was 15.

After brushes with the law for underage smoking and theft of two motorcycles, Mr Yap was sent to the boys' home for beating up and robbing a man in his 50s.

His two-year detention, which he described as traumatic, gave him the jolt to change his life.

He said: "I regret what I did. In court, I cried and asked the social workers to apologise (to the victim)."

When his parents visited him at the home, "all of us broke down, but my mother was very encouraging - she told me that I was better than that, more than that", he said.

Mr Yap resolved to stay away from gangs and he studied hard at the home, topping his class there.

He said: "That was the first breakthrough. It felt so good to be first."

After his release in 2011, he returned to Pei Hwa Secondary School and sat the N levels a year later.

After topping his cohort, he pursued an aerospace technology diploma at NP.

He is also a software developer on the side, a passion that started during his part-time job at a maid agency.

"My parents couldn't give me much to spend, so I had to work," he said.

At the maid agency, Mr Yap noticed the inefficiency of the system for customers to settle their paperwork. He took it upon himself to create a system that enabled customers to complete the process in five minutes instead of the usual hour.

"Everything was self-taught, through online courses and reading," said Mr Yap.

Word got out and his skills became so sought after that at least five other companies have contacted him to create similar systems for them.

Mr Yap lives with his cabby father while his two younger brothers live with their mother. Despite their parents' divorce, he is close to his brothers.

His youngest brother is following in his footsteps, taking up aerospace engineering at NP this year.

Mr Yap plans to study software design or IT at a local university after his national service.

He said: "I'm thankful to have received the scholarship. It enabled me to concentrate on studying and not worry about working."

Brought together by overseas school trip

They appeared a bit too close to be just poly friends.

Miss Amanda Tan and Mr Jasper Yap sat together throughout our interview.

He listened intently and gave encouraging nods when she spoke.

They also seemed comfortable when posing together for photos.

When asked, they admitted that they have been dating for more than a year.

Miss Tan and Mr Yap met when they were assigned to a committee responsible for planning a school trip last year to Chiang Mai, Thailand, to help build kindergartens.

On late train rides home after committee meetings, Mr Yap and Miss Tan, who live near each other, would share bits about their past with each other and they hit it off.

Miss Tan said of her boyfriend: "We share the same faith and he's a very kind person.

"Someone who can make a 180-degree change like Jasper is inspiring."

Their mutual respect for each other blossomed into romance and they started dating after the Chiang Mai trip.

Mr Yap believes their past struggles have bonded them as a couple.

Asked what he felt when he heard about Miss Tan's family background, he said: "I felt sad, but encouraged. It made me see her in a new light."

The couple are looking forward to a lasting relationship.

Miss Tan said: "My parents have met Jasper. They are all on really good terms."