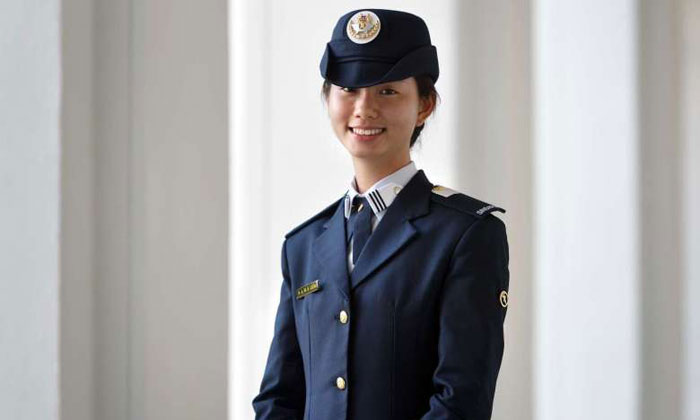 As a student at Bukit Panjang Government High School, Miss Natasha Ann Lum Mei Seem was a middling student whom some perceived as "girlish and timid".

But at Pioneer Junior College (PJC) in Choa Chu Kang, the petite 19-year-old became president of the student council after peers saw how quickly she took charge of a surprise fire drill during a camp.

She did well at the A levels, with As in geography, literature in English and mathematics and a B in economics, and went on to join the Singapore Armed Forces (SAF).

Now an officer cadet (OCT) in the air force, she is one of five Singaporeans awarded the prestigious President's Scholarship this year.

The officer cadet, who has gone on a field camp and route marches during Basic Military Training, hopes to pursue East Asian studies in the United States next year after Officer Cadet School (OCS).

The other President's Scholars this year are: Miss Olivia Ong Si Hui, who was from Dunman High School and will study psychology at the University of Oxford; Mr Timothy Ong Kah Yong, of Anglo-Chinese School (Independent), who will read law at the University of Cambridge; and Raffles Institution graduates, OCT Joshua Chin Zen Jie, who hopes to pursue environmental science next year after OCS, and Mr Sean Ong Zhi Han, who is bound for Tufts University in the US to study history.

They were picked by the Public Service Commission for their character, leadership potential and outstanding co-curricular and academic achievements. President's Scholarships have been awarded since 1966.

OCT Lum said her decision to join the SAF came from an interest in aviation sparked by her father, technician Kenneth Lum Kien Seng, 46, an aviation enthusiast. Attending a tea session also changed her view that the military was only for men.

"I felt regret after leaving secondary school as I didn't put myself out there to try out new things," she said, noting that she had wanted to run for the student council in secondary school but did not.

"When I went to JC, I set my mind to my goal of achieving more and exceeding expectations, and went out of my comfort zone," she said.

She has a 17-year-old brother, a polytechnic student, and her mother Chin Siok Yun, 43, is a housewife.

For Miss Ong, an internship with the Ministry of Social and Family Development and time spent volunteering at a student care centre had opened her eyes. She said: "You see how social problems impact individual families. I also learnt a lot from the children themselves, such as how to be giving towards the people you love."

At the award ceremony yesterday, President Tony Tan Keng Yam told the new batch of President's Scholars to continue the legacy of Singapore's forefathers, including that of the late former president S R Nathan. "He truly embodied the values of public service, placing country before self even to the point of quite literally risking his life, during the Laju hijacking incident," he said.

"He was a fearless defender of Singapore's interests abroad, and a passionate nation builder at home, patiently weaving the fabric of a caring and cohesive society."

A minute of silence was observed in Mr Nathan's memory at the ceremony.