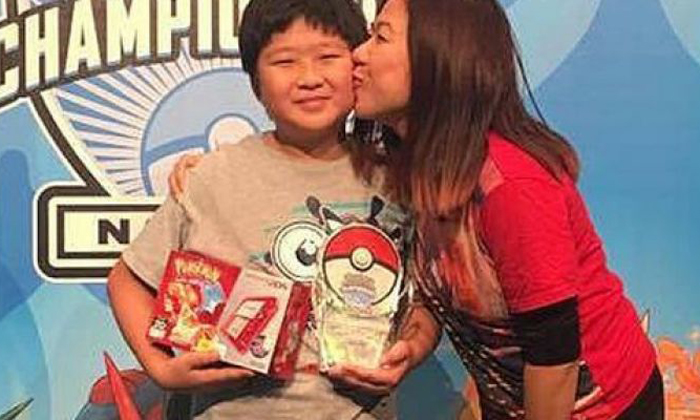 He started playing Pokemon competitively last April and was taking part in a national competition within two months.

By August, Singaporean Corey Elliot Yuen was good enough to compete with the world's best.

The 10-year-old placed fifth in the junior division of this year's Pokemon Video Game World Championships in San Franciso, surpassing his dream of placing in the top 16.

"There were children from all over the world, and those who made it to day two (of the competition) were the best of the best, so even top 32 would have been amazing," says Corey.

"I was aiming for top 16 and to achieve fifth place made me so happy."

The world championships, which took place from Aug 19 to 22, is a by-invitation-only event and players earn their invitations by doing well throughout the Championship Series Season.

Corey, the eldest of five siblings, was not the only one in his family competing at the event.

His sister Morgan Lola and brother Connor Louie also managed to clinch spots in day two of the world championships.

Connor, eight, says: "We did not do very well and were knocked out early, but it is okay because we played in side events after that and won many prizes."

Along with Morgan, six, Connor was taught the game by their elder brother.

"We have beaten our brother at some events, but it does not matter who wins or loses, we just want to have fun," says Connor.

Their love for Pokemon started because of their mother.

Madam Adelene Kong, 40, was a Pokemon fan when she was younger.

She pulled out her old Game Boy machine for her children to play Pokemon on when they were old enough.

She says: "But when we tried to play it, it did not work. So I bought them books and DVDs.

"They enjoyed watching the shows and would discuss all the types of Pokemon."

The family found out about the competitive gaming scene last year.

Madam Kong says: "They have attended close to 30 events in the past year. They really enjoy it so I will continue (to take them to events)."

Her husband, Mr Victor Yuen, is not a fan, but he is supportive of their hobby. He attends every event to take photos of them.

The three children say their grades have not suffered because of playing Pokemon.

"Ever since I started competitive Pokemon, my maths and science grades have improved," says Corey.

"When I build my Pokemon team, I must know how many attack or health or defence points I want to put in each of my six Pokemon.

"You start with a certain number that you need to divide up to put into each Pokemon."

Doing that meant he had to figure out percentages and decimals before he was taught them in school.

Despite being a big fan of Pokemon, Corey rarely plays the mobile version Pokemon Go.

"I don't have a mobile phone or an iPad. But it is fun to sometimes play on my mum's phone when she is not looking," he says.

Corey is still a bigger fan of the video game.

"The Pokemon Video Game Championships is an intellectual sport that is much like chess," he says.

"It is a turn-based strategy game that uses your knowledge of over 700 Pokemon and their abilities to battle another person.

"It is very difficult to predict and the ability to read the opponent is the key to winning."

But at the end of the day, the family is in it not for winning, but for the experience.

Corey says: "Attending World Championships in San Francisco was amazing and mind-blowing. Win or lose, the experience of being there is the best."

The Pokemon Video Game World Championships, which started in 2009, is a by-invitation-only event.

Players worldwide receive invitations based on their Championship Points at the end of the gaming season, which lasts about 11 months.

The top players from each region will immediately qualify for the second day of the championships, receiving an invitation along with a travel award.

The award consists of round-trip airfares to the event and hotel accommodation.

Others, who meet the qualifying mark, have to go through a round on the first day before moving on to the second day if they do well enough.

There are the Masters, Senior and Junior divisions.

Related Stories
Kid wants to be the next Joseph schooling -- and boy does he have some neat skills!
Kids with special needs pick up real-life skills virtually
More About:
pokemon
talent
youths
teen
video games