Romance blooming among not 1 but 3 local celebs 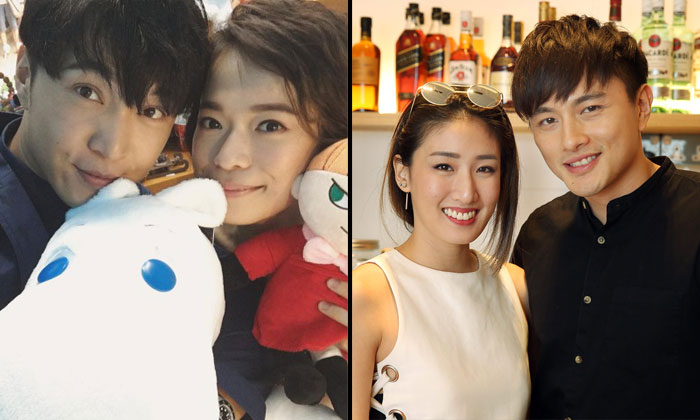 Is someone spritzing pheromones in the air at Mediacorp?

Celebrities are falling in love left, right and centre, with three new star couples coming to light in the past year.

With Valentine's Day just around the corner, The Sunday Times checks in with the new couples to find out more about their budding romances.

The most tight-lipped of the three pairs are Liu, 37, and Chan, 35, who were first spotted shopping at Chinatown's Chinese New Year Bazaar last year.

They denied dating then and confirmed their relationship only later in the year.

Since then, they have kept a low profile and rarely talk about their love life in interviews.

But the Malaysian actress once revealed why she was attracted to her partner. "He is serious and innocent. I find him reliable."

They declined to be interviewed for this story.

In contrast, the other two couples are more open about their affection for each other - to a certain extent.

Last year, Shanghai-born Xu, 28, and Singaporean Chin, 31, revealed that they were an item. But they had been dating for almost a year before that.

Between the two, Chin is the more established performer, often landing leading roles, such as those in upcoming Channel 8 drama Legal Eagles and online Mandarin series 2589 Days Apart.

Xu is still finding his footing in the entertainment industry.

Last year, he made strides by winning his first popularity prize at the Star Awards and making his movie debut in local comedy Young And Fabulous (2016).

Chin and Xu got closer as friends on the set of period blockbuster The Journey: Our Homeland (2015), where they played mother and son.

In between takes, they chatted about travel and books, and bonded over their Christian faith.

At some point, she gave him a book about travelling by Taiwanese singer Cheer Chen.

He says: "I was touched by the fact that she was listening intently to our conversation and remembered what I like."

Later, Chin recalls searching for Xu's name when she got hold of the filming schedule of the Channel 8 long-form drama Life - Fear Not (2015-2016), in which they played lovers.

"I realised that I had feelings for him when I got the rundown and would anticipate if his name was there," she says. "I was very happy when I saw his name."

He asked her to be his girlfriend on the way to the TV station at Caldecott Hill in December 2015. She agreed and they held hands for the first time.

On their decision to go public with the relationship much later, Chin says: "Once we announced it, people would start asking us questions. We wanted to strengthen our bond first. It's the same with every young relationship, it's no different just because we are actors."

Although both of them are serious about the relationship and usually date with the intention of marriage in mind, they say it is too early to speak of them walking down the aisle.

"But who knows?" Xu laughs. "Maybe when I win a Best Actor award one day, I might propose to her on stage?" Less coy about their dating life are Pow, 26, a television actor and former Manhunt contestant, and Wang, 26, a 98.7FM radio DJ.

They are most demonstrative on social media and their Instagram accounts are filled with blissful wefies, goofy videos and dedications to each other.

They got to know each other better during drum lessons to prepare for the President's Star Charity in 2015.

Pow, who is filming Channel 5 series Faculty, says: "I would check the schedule to see who was going for the rehearsals. I remember there was once I went and she wasn't there. I was so disappointed."

He pursued her for about eight months with "the tenacity of a cockroach", she says.

He hung around the radio station to chat with her, asked her out for supper and gave her lifts because her house was "en route" to his home.

"Then I realised he lives in Woodlands," she says. "I live in the east. He would say, 'Yah it's on the way, it's linked by one expressway.'"

The benefit of both of them working in the same industry is that they can give each other constructive feedback.

For example, he once pointed out that she tended to speak too quickly and that listeners may have trouble understanding her.

What if there are going to be physical scenes in the course of their work, such as the steamy one where Pow made out with actress Oon Shu An for local anthology movie, 4Love (2016)?

Wang says: "That was before we got together, so I don't care. Now that we are in a relationship, it is basic respect to tell me beforehand."

It is too early to talk about marriage as the pair want to be financially stable first.

Pow, who is investing in a yakitori restaurant, Mojo, which opens later this month, is ever practical.

He says: "We have to work hard. We are not born rich and we are not super rich now."

Read the full story in The Straits Times.