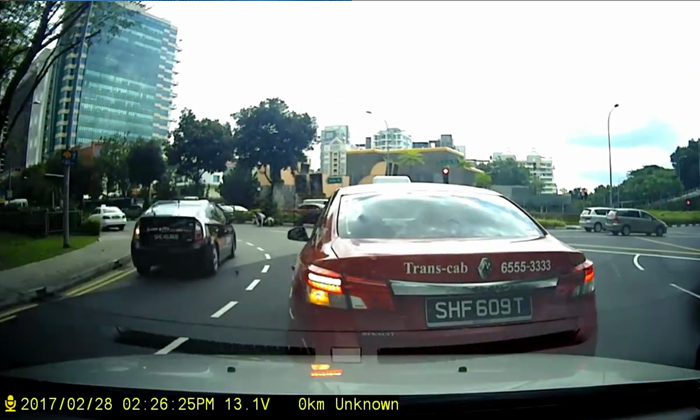 A motorcyclist who tried to exit the Newton Circus roundabout by cutting into a car's lane was sent flying on Tuesday (Feb 28).

In a video uploaded to Facebook page Beh Chia Lor - Singapore Road, credited to Zayne Ng, a red Trans-cab taxi is seen filtering into the third lane of the Newton Circus roundabout.

As the vehicles approach the Scotts Road exit, a white car filters in front of the taxi from the leftmost lane, intending to go straight instead of turning out of the roundabout.

However, just then, a motorcyclist riding in the second lane suddenly cuts into the third lane in an attempt to exit the roundabout.

Due to the suddenness of the motorcyclist's actions, the white car is unable to brake in time and hits the motorcyclist. The impact of the collision sends him flying to the side of the road, where he can be seen making his way to his feet.

As the cars behind begin to drive off, the driver of the white car is then seen getting out of the vehicle and walking towards the motorcyclist to check on him.

While motorists can choose to drive straight or turn left on the third lane, motorists on the two rightmost lanes can only go straight.

Hence, the motorcyclist should not have tried to abruptly exit the roundabout from the second lane.