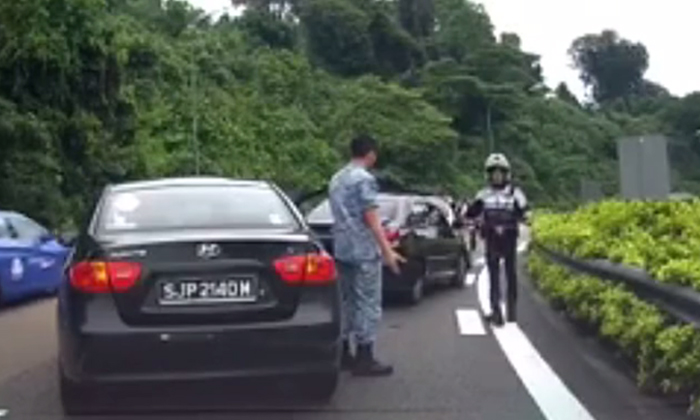 A three-car chain collision occurred along PIE towards BKE on Oct 26 after an attempt to avoid crashing into a traffic police (TP) officer and his motorcycle.

In Beh Chia Lor - Singapore Road's Facebook video below, driver Johann Lim was driving on the PIE road when he witnessed a chain collision that happened right in front of him.

The video shows the car at the very front coming to a sudden halt to avoid hitting the TP officer and his stationary motorcycle.

This abrupt action resulted in the other two car drivers at the back to jam on the brakes and crash into one another.

The navy army officer in the car just in front of Johann's car alighted from his car and raised his hands, gesturing for an explanation from the TP officer.

The driver of the middle car involved in the chain collision then got out from his car to clarify with the TP officer about what had happened.

From Johann's rear camera footage, another TP officer on a motorcycle stopped by to access the situation.

Many Facebook users left their opinions in the video's comments section, majority defending the TP officer.

"The TP officer probably had to park his vehicle at a safe distance from a possible accident scene to warn oncoming drivers of the mishap ahead."

"For those who blamed the TP officer, do you think that he wanted to be on the extreme right and fast lane for fun? He risked his life for a reason, and that is to alert drivers of a possible road accident in front," user Abdul Hamid commented.

"On 26 October 2016, at about 7.43am, the police were attending to an accident involving a car and a taxi along PIE (Tuas) slip road into BKE (Woodlands). The officer responding to the incident had parked his motorcycle behind the accident scene to divert motorists away from the affected lane.

"During this period, an accident involving three cars occurred near the incident site. No injuries were reported. The drivers were advised to lodge their insurance reports and no further police assistance was required."