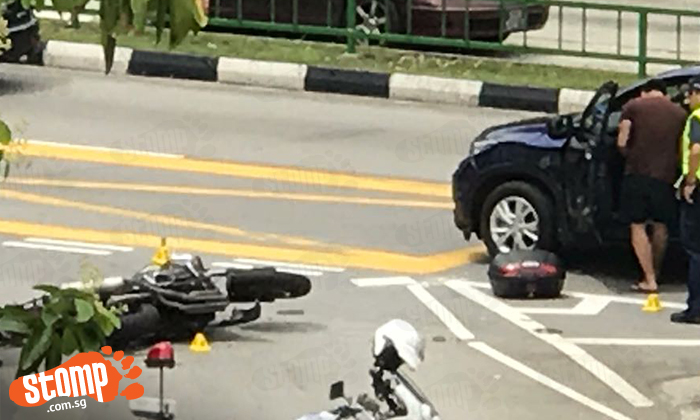 Stomper A was near an Esso petrol station at Street 34, Tampines Avenue 7 at around 12.50pm today (Jan 22) when he saw witnessed the aftermath of an accident; the wreckages of a motorcycle were sprawled across the road in front of a dark blue sedan.

Police officers were already at the scene, and a CSI van was also seen.

A alerted Stomp to the incident, and Stomp promptly arrived on the scene to report on the incident.

"The motorcycle was already in pieces, but the sedan seemed intact.

"There were also two people on the pavement by the side of the road, but I'm not sure if they were involved."

The Police has issued an official statement on the incident:

"On 22th Jan 2017, the Police were alerted to an accident involving a motorcycle and a taxi at the junction of Tampines Ave 7, Street 34.

"Two individuals were conveyed to the Changi General Hospital.

Related Stories
Get this crazy driver of blue Toyota Prius SKU4774H off the road, please!
53-year-old woman killed after being run over and pinned underneath van at Victoria Street
Motorcyclist thrown off bike after crashing into car at Woodlands junction
accident
Tampines
motorcyclist