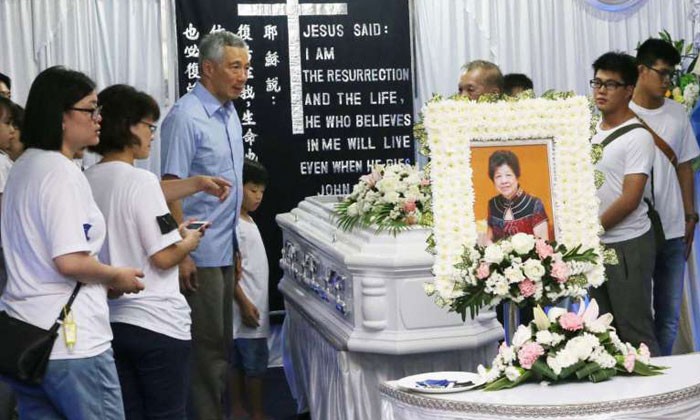 Prime Minister Lee Hsien Loong on Sunday (Jan 22) night paid his respects at the wake of a 73-year-old woman who had been looking forward to taking pictures with him during his visit to Teck Ghee on Saturday (Jan 21), but died of a heart attack early that same day.

PM Lee had found out about Madam Sim Chiu Hong's death from a Facebook comment her daughter Gena Tan left on one of his posts on Sunday night.

He had posted pictures of his visit to Teck Ghee market, as well as the estate's annual Hongbao Presentation Ceremony.

In response, Ms Tan, a 43-year-old who works in the insurance industry, wrote that her mother, a stallholder at the market at Block 341, had died the morning of PM Lee's visit.

Her mother, 73, had been "looking forward" to taking pictures with PM Lee, but she died after suffering a heart attack early in the morning, Ms Tan wrote.

PM Lee responded less than 10 minutes later: "I am very sorry to hear this. Please accept my deep condolences. Hope your family is alright. Let me know if you need any help!"

Madam Sim had been very excited to meet PM Lee and had prepared a set of clothes just to meet him, Shin Min Daily News said in a report on Monday (Jan 23).

However, she fainted suddenly at 5.20am on Saturday and died of a heart attack soon after, her daughter Ms Tan told Shin Min.

Madam Sim and her husband Mr Tan Choon Kooi, 75, had run a stall selling dried goods for about 30 years.

Ms Tan said her mother had been a big fan of PM Lee and would take pictures with him whenever he visited the market.

Ms Tan said she did not expect that PM Lee would pay his respects at her mother's wake after reading her comment on his Facebook page.

She and her family were very touched and felt very honoured.

She said she "never thought that PM would drop by", adding that it "made us feel very warm, he really cares about us".

PM Lee spoke to Ms Tan's family at the wake and stayed for about 20 minutes before leaving.

"PM said he had a deep impression of my parents' stall and remembered that they have always worked hard at it. He even told my dad not to give up the business and said my dad is still young and should keep up an active lifestyle," she said.