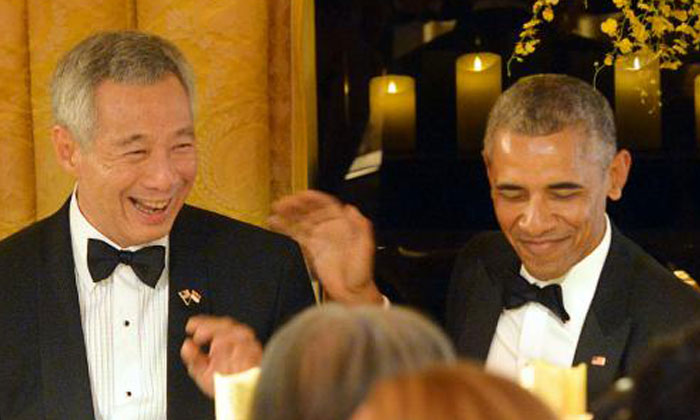 Much hype has been given to Prime Minister Lee Hsien Loong's visit to Washington DC this week.

US President Barack Obama and his wife Michelle welcomed PM Lee and Mrs Lee at the White House on Aug 2, as Singaporeans watched from their homes via Facebook live.

Late that evening, Mr Lee became the first Southeast Asian leader to be honoured with a US state dinner, and only the fifth in Asia after India, China, Japan and South Korea.

Here are five of the best moments from the event:

In his speech at the White House lawn, the US President showed off he was well-versed in Singapore lingo, greeting the crowd in Singapore's four national languages - English, Malay, Tamil and Chinese.

He then referred to Singapore's society as "rojak - different parts united in a harmonious whole. We're bound by the belief that no matter who you are, if you work hard and play by the rules you can make it".

The outgoing President also referred to Singaporeans in the crowd as "uncles and aunties", drawing laughter from the audience.

Obama's five-minute speech was peppered with many other references to Singapore, including a joke that Washington was experiencing some "Singapore weather".

Later, he proved that his knowledge of the city-state was deeper than expected when he mentioned Singapore's Blk71, a factory building at Ayer Rajah Crescent which houses a large number of technology-start-ups, venture capital firms and tech incubators.

And although he had a hard time pronouncing founding prime minister Lee Kuan Yew's name, the President was spot on when he spoke of the pride Singapore has in being "a little red dot on many maps but with a very big impact on the world".

3) A techie for a Prime Minister

The President appeared impressed by PM Lee's ability to code, and recalled the time the latter created a source code to solve sudoku puzzles.

"The Prime Minister himself wrote a programme to solve sudoku puzzles - which Michelle will want," he said.

Obama was even aware that Singapore's foreign minister Vivan Balakrishnan took PM Lee's code a step further by translating the code into Javascript.

"So I've got to start asking John Kerry to do that," he said as all eyes turned toward the US secretary of state.

After the meeting, the White House and PM Lee took the opportunity to swap their Instagram accounts.

The White House gave PM Lee's followers a behind-the-scenes look at the White House state dinner in its takeover of his account. Meanwhile, Singapore's Prime Minister was active on the White House account, posting five photos from his visit to the US capitol.

One of PM Lee's photos showing a crying baby surrounded by happy faces at the arrival ceremony proved to be a hit, garnering over 21,400 Instagram hearts in just four hours.

PM Lee also raised his glass, and in his toast to President Obama, announced that Singapore had named an orchid hybrid in honour of him.

Mr Lee explained that the orchid hybird, Dendrobium Barack and Michelle Obama, is "a hybrid of breeds native to Singapore and Hawaii, where the President was born … most of us believe", as the audience burst into laughter.

He was referring to conspiracy theories that the President was born outside of the US.