Over $11,000 raised for foreign worker who was owed wages 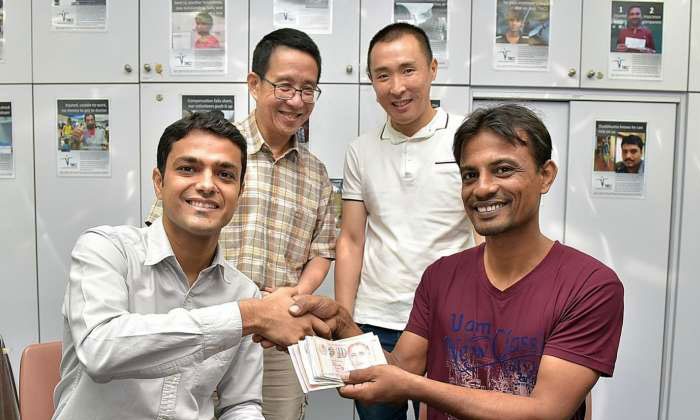 Bangladeshi construction worker Islam Rafiqul will be going home, thanks to more than $11,000 in donations.

His employer, Geosray Engineering and Services, had ignored a Labour Court order to pay him $7,363 in wages that he is owed.

The 42-year-old was stuck as he did not have the means to pursue other legal options.

Yesterday, non-governmental organisation Transient Workers Count Too (TWC2) handed him a $1,250 cash cheque, from donations by readers who had read about his plight in The Straits Times last week. He also received $10,160 in cash from online fund-raising website give.asia.

A sum of $302 was deducted by banks to cover credit card processing fees for donors who used cards to donate through the website.

Mr Aseem, a permanent resident who runs the website on a voluntarily basis, said donors were moved to help. "Nobody likes stories of injustice."

A law firm, which asked to remain anonymous, has also offered to help Mr Islam recover the debt from his employer on a pro bono basis, TWC2 said.

Mr Islam said he was "very happy" with the help. "The Singapore people (are) good (to me)."

He plans to use the money to buy a plane ticket home next week and save the rest. He also hopes to return here to work again.

Related Stories
Chinese company withholds employees' pay --- but the reason is not what you will expect
My boss lets me use the toilet only twice a day, and other shocking revelations from S'pore employees
What Google, Pixar and Apple employees eat for lunch
wage owed to foreign workers
foreign workers
donate