Not 1, but 2 accidents along Braddell Road 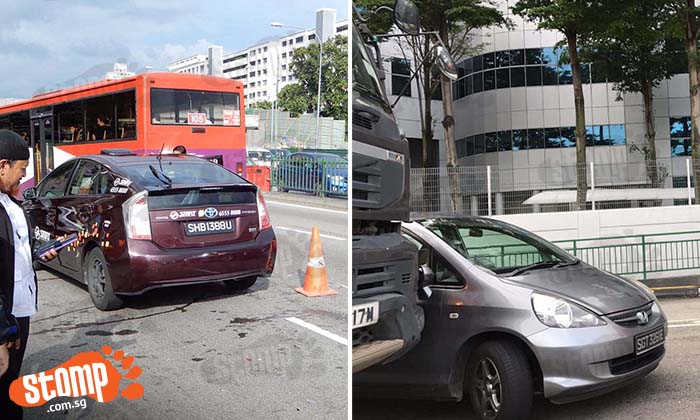 Submitted by Stomper A, C

Two accidents, one involving a taxi, a Volvo and a motorbike, and another involving a truck and a Honda, caused a major traffic jam along Braddell Road this morning (Jan 26).

The first accident that involved an SMRT taxi, a white Volvo and a motorbike, happened around 8.20am.

Stomper A was in the vicinity and alerted Stomp to the three-vehicle accident.

Mr Tan Yong Qiang, the taxi passenger, said that the cab had started filtering left from the centre lane of Braddell Road towards Toa Payoh when it crashed into the back of the white Volvo, The Straits Times reports.

The white car also collided with the back of a motorcycle in the left lane of the three-lane road.

The motorcyclist, who declined to be named, said he suffered some cuts on his right leg.

The female driver of the white Volvo declined comment.

A Police spokesperson said that there were no reported injuries and all three motorists have agreed to settle the incident privately.

Stomper C alerted Stomp to another incident where a truck had collided with a silver grey Honda.

"I was in a taxi, on my way to work when I noticed a huge traffic jam along Braddell Road at around 9.40am.

"At first, the taxi driver and I, we thought that it was due to the rain.

"However, we soon discovered that there was an accident that happened ahead of us.

"I saw a Land Transport Authority (LTA) enforcement officer attending to the motorists of the truck and Honda car.

"However, I did not see any obvious casualties. Hope there will be no reported injuries!"