Accident between biker and car at Tampines Ave 7: Video shows what happened 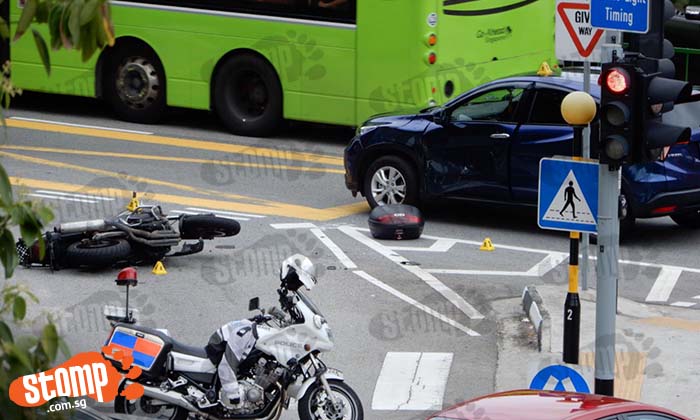 Submitted by Stomper Johnny, A

Stomper Johnny alerted Stomp to a video showing the accident between a motorcycle and a car near an Esso petrol station at Tampines Avenue 7, Street 34, at around 12.50pm yesterday (Jan 22).

Stomp was first alerted to the accident yesterday (Jan 22) by Stomper A, who was in the vicinity of the accident when it happened.

In the in-car camera footage recorded by Johnny, the driver of the blue car can be seen attempting to make a U-turn, when the motorcyclist, who is heading straight from the opposite direction, crashes into the car.

The video also shows two pedestrians waiting for the traffic light to change immediately taking out their mobile phones, presumably to call for help, as they dash over to the accident scene.

Another driver of a white car that had made a U-turn, then alights to render help as well.

"Hope the pillion is alright. I have sent this footage to the Traffic Police (TP)," said Johnny.

"The motorcycle was already in pieces, but the sedan seemed intact.

"There were also two people on the pavement by the side of the road, but I'm not sure if they were involved."

The Police has issued an official statement on the incident:

"On 22th Jan 2017, the Police were alerted to an accident involving a motorcycle and a taxi at the junction of Tampines Ave 7, Street 34.

"Two individuals were conveyed to the Changi General Hospital.