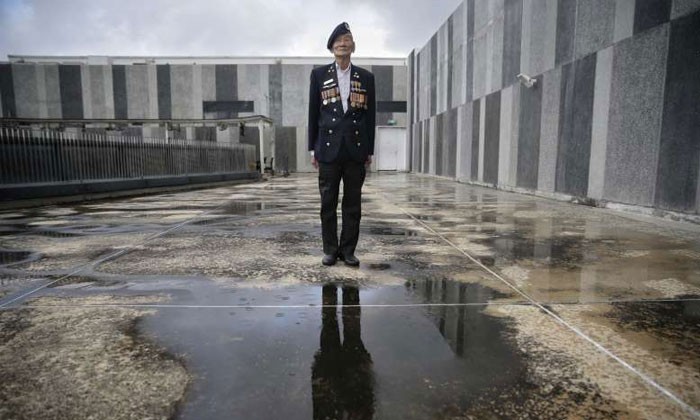 When he was 13, Booi Seow Kiat, who was living in Japanese-occupied Malacca in 1943, was forced into joining the Japanese army.

He was told one day that there would be a free outdoor movie screening at the Capitol Theatre.

But when he turned up, soldiers with rifles and bayonets rounded him up, along with other boys and men, and put them into trucks.

Mr Booi, who is now 87 and living in Toa Payoh, was transported to Singapore, where he worked for the Japanese Navy Air Service at an airbase in Seletar, and received basic training in maintaining aircraft.

He remembers climbing into the cockpit of an aircraft, when the Japanese soldiers were not around.

But he was found out and given a severe beating. "They pulled me by the ear and slapped me twice. I scolded them in Chinese and they hammered me (on the head) so hard that I couldn't makan (eat) for a week," he recalled yesterday.

He was also made to escort prisoners of war to River Kwai in Thailand to build the Death Railway.

"I was lucky. If they had made me do the railway work, I would have died there," he said. More than 100,000 Asian labourers and 16,000 Allied prisoners are said to have died constructing the railway.

While life under the Japanese forces was strict - almost like that of a prisoner - Mr Booi said he found some consolation in having food, clothing and a place to sleep.

After Japan surrendered in 1945, Mr Booi was given two pots of rice and put on a truck to Batu Pahat in Johor. From there, he took over a week to walk home. "Along the way, we slept on the verandahs of Malay (villagers') houses. Each of us gave some rice, which they helped to cook with tapioca."

Mr Booi returned to Singapore in 1948 when he joined the British Armed Forces and was deployed to Pulau Blakang Mati, now known as Sentosa. He quit after three years, and took on jobs with the Singapore Traction Company and the Auxiliary Fire Service as a driver.

Today, an active Mr Booi helps his wife, 80, at a hawker stall.

On why he joined the navy, Mr Booi said: "I wanted to go overseas. I've sailed to places such as Taiwan, Australia, New Zealand, the Middle East and Hong Kong."