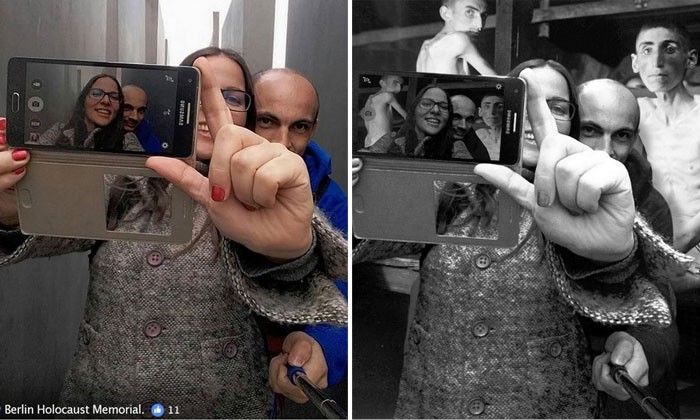 "Yolocaust" was launched by an Israel artist, Shahak Shapira, to shame selfie-takers who poses without a care at the Holocaust Memorial in Berlin.

He noticed that over the last few years people have been using the memorial as a backdrop to selfies and so she took those selfies and combined them with footage from Nazi extermination camps.

The artist then combined the photos with comments, hashtags and likes that it got and he was shocked at the people who were smiling, juggling and doing yoga because he saw comments like "jumping on dead jews" on the Internet.

View the gallery above to see the photos he edited and be warned that the images may be disturbing.

He said, "About 10,000 people visit the Memorial to the Murdered Jews of Europe every day.

"Many of them take goofy pictures, jump, skate or bike on the 2,711 concrete slabs of the 19,000 m² large structure.
"The exact meaning and role of the Holocaust Memorial are controversial.

"To many, the grey stelae symbolise gravestones for the 6 Million Jews that were murdered and buried in mass graves or the grey ash to which they were burned to in the death camps."

For any selfie-takers who does not wish to be on his site, he invited them to contact him.