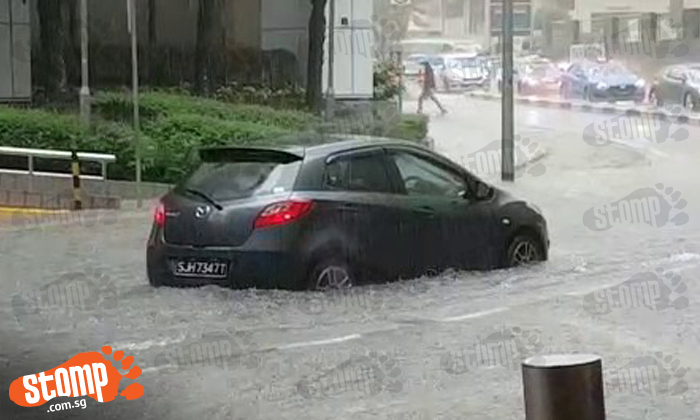 Stomper Jeffrey and Anon alerted Stomp to a flash flood that had occurred at around 12pm today (Apr 18) along Mount Elizabeth, located between Paragon shopping centre and Mount Elizabeth Medical Centre, which left a Mazda stranded.

In the video contributed by Jeffrey, a Mazda can be seen driving through the water that reaches half of the car tyre's height.

It stops metres after passing the zebra crossing and a passer-by can be heard exclaiming, "It's stuck."

The National Environment Agency posted a tweet at around 2.45pm, saying:

"Heavy rain warning: Heavy thundery showers are expected over many areas of Singapore between 2:45pm and 3:50pm..."

The Public Utilities Board also posted tweets at around 1.30pm warning of high flood risks at places including Exeter Road, Tanjong Pagar Road and Balmoral Road.

Stomper Carol also contributed photos of a flash flood that occurred at 635 Balestier Road at around 2pm.

The Stomper said that her store was flooded in a matter of minutes, and the water was about ankle height.

Check out the videos contributed by Stompers Jeffrey and Anon.