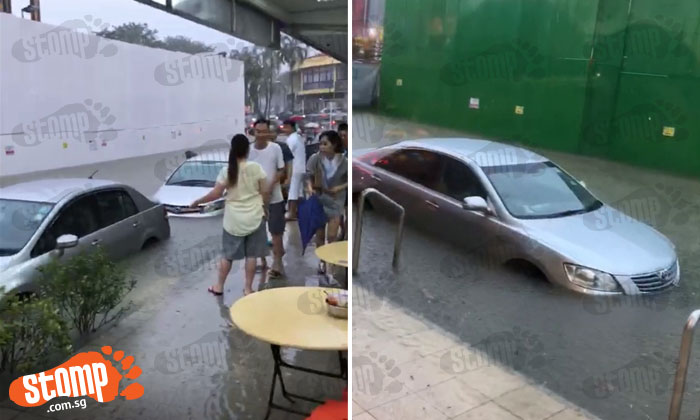 Stomper Wendy was at Upper Thomson Road today (Dec 24) at around 5.45pm when she saw cars getting partially submerged in a flood caused by a heavy downpour.

In a telephone interview, the Stomper said that water level almost reached the handles of the cars at some points along the road.

Drivers who had parked their cars around Upper Thomson Road found themselves stranded as they could not enter their vehicles.

"The water level was around 70cm high.

"Traffic was heavy due to the downpour."

Stomper Dale who was driving along Upper Thomson Road at around 6pm also sent Stomp photos showing the flood.

He said that the flood caused a jam but noted that there were no stationary vehicles along the road.

Dale initially stopped his car to prevent water from getting into the interior of his vehicle, but eventually drove away after seeing several vehicles travelling through the flood.

Stomper Arjun was also in the area and sent Stomp a video of the situation.