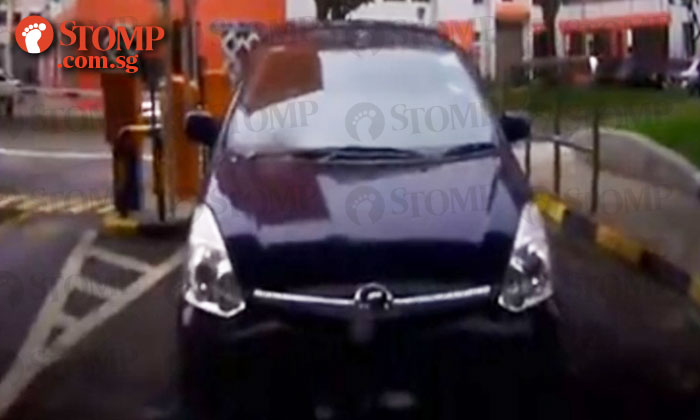 A driver who tailgated another motorist across a carpark gantry in Choa Chu Kang has received a summons from HDB following a Stomp report.

On May 10, it was reported on Stomp that a Toyota driver had tailgated Stomper Darren's car to avoid paying for parking.

In a video Darren sent, the Toyota driver can be first seen driving closely behind the Stomper's car.

The Toyota driver continued to tailgate the Stomper's vehicle as he crossed the gantry, without first waiting for the boom arm to fall, thereby evading parking charges.

We reached out to HDB after the report was published and asked about the consequences for drivers who have been caught in such an act.

Said a HDB spokesperson in response to Stomp's query:

"HDB carries out regular car park enforcement action in HDB estates. We will investigate suspected tailgating cases, and motorists who are found to have evaded payment will be fined. Recalcitrant motorists will face court action and a fine of up to $2,000 per offence.

"The public can report parking offences, including cases of tailgating, to HDB’s Branches or the Car Parks Department at hdbcarparks@mailbox.hdb.gov.sg. HDB will investigate and take the necessary enforcement action. In the Choa Chu Kang case mentioned by Stomp, we have investigated and issued a summons to the vehicle owner."