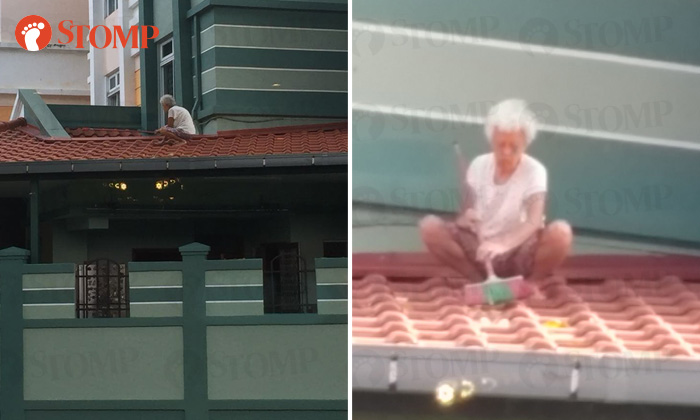 An elderly woman was spotted on the roof of a semi-detached house located along Serangoon Avenue 1 before Lorong Lew Lian at about 10am today (Jul 27).

Stomper Christine, who was working nearby, shared photos of the incident with Stomp.

The elderly woman is seen perched on the roof with a broom in hand.

Worried about the woman's safety, Christine tried persuading her to get off the roof.

"I saw the auntie climbing out of a window to get onto the roof.

"And I told her to come down but she said 'it's okay, I always like that climb one, it's okay'.

"She just continuously swept the leaves off the roof.

"I was so worried that she might fall down, especially since she's already so old."

However, even when Christine was about to leave half an hour later, the elderly woman still refused to come down.

"She said she'll come down but when I turned around to see before leaving, she was still there, and she crawled to another part of the roof.

"It was my first time seeing something like that, and I just wanted her family to know what a dangerous situation she has put herself in."