Yishun resident plagued by persistent litterbug from upstairs for months 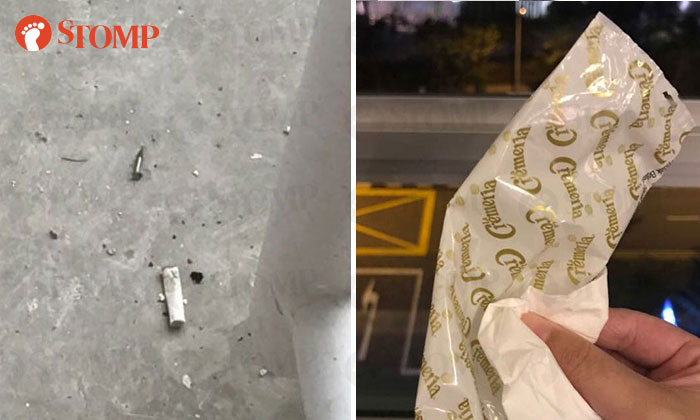 At least once every month since March 2017, Stomper Anonymous who stays at Block 511C Yishun Street 51 has been finding discarded cigarette butts, ashes and food wrappers in his flat, all allegedly thrown by a neighbour living above him.

In January this year, an ice cream wrapper flew into a window in his living room before landing on Anonymous.

However, the situation did not improve despite multiple visits by NEA officers.

"I was especially annoyed when the garbage landed on my guest in March this year."

"It's embarrassing for a host when this happens to your guest.

“The sofas in my living room are lined with fabric, so I’m always wary that the cigarette butts or ashes will start a fire in my home.”

Anonymous told Stomp other than the usual litter, the culprit also occasionally throws water down.

“When it first started, the person would still do it while it was raining.

“I never suspect until one time when I found water in my service yard despite even when it wasn’t raining.

“I don’t know where the water is from, and I’m concerned the dirty water will soil my laundry."

Anonymous revealed that he had visited two neighbours living on floors above his last year to resolve the issue amicably.

When he visited the first household, an old lady allegedly answered the door and told him there were no smokers in the house after he voiced his concern.

He later went to the second household and a woman reportedly told him that she would inform her husband not to flick cigarettes ashes down anymore.

Asked if there was an ongoing feud between him and his neighbours, Anonymous said:

“Not that I know of.

“I just moved in a few years ago and I don’t even know the neighbours that well.”

"I suspect all these items are thrown by the same person because the cigarette butts thrown look like they're from the same brand every time."

The Nee Soon Town Council told Stomp that it is working with relevant agencies to curb the 'anti-social act'.

An official statement from the town council read:

"We understand and empathise with the resident’s concerns. Due to the nature of the offence, high-rise litterbugs are difficult to apprehend.

"This is an anti-social act which can cause harm (health, safety, and hygiene) and all stakeholders - agencies, the Town Council and residents, need to work together to address it.

"Specifically for the resident's concerns, the Town Council has been in contact with the relevant agency/s working on the matter.

"As part of the Town Council's process, we have issued two rounds of notices to residents of the blocks, before the agency/s steps in to deploy further actions.

"We call on all residents to encourage social graciousness and a sense of civic consciousness. We appreciate the media’s assistance in reminding all residents on their shared responsibility as we live together in a common estate."