Someone has taken littering to new levels at Yishun Street 61 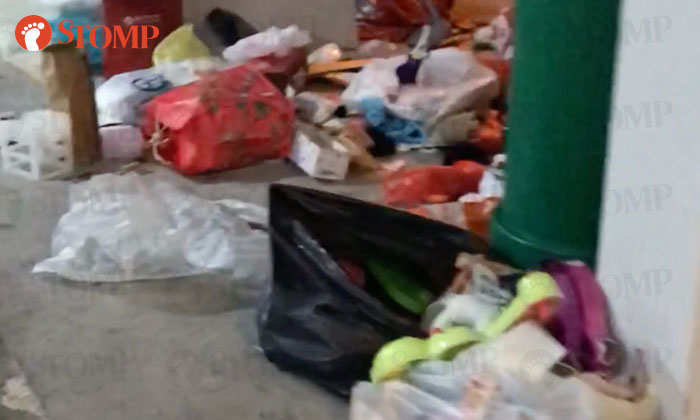 Stomper Faddli was shocked to see a large pile of rubbish discarded near a lift lobby at Block 646 Yishun Street 61 on Sunday (Jan 14) at around 9pm.

Speaking to Stomp via the phone, Faddli said that he was retrieving items from his car when he came across the heap of trash.

He took a video and sent it to Stomp.

The pile mainly consisted of paper bags and packaging, as well as Tupperware containers.

Ironically, the items were discarded beside a rubbish bin.

According to Faddli, this was a common sight, and there are also rubbish heaps discarded near the other two lift lobbies in the block.

The pile of rubbish was thrown recently too, for it was not there the night before.

Thankfully, the pile was cleared early this morning (Jan 15).

“It is such a shame.

“Staying in Singapore, we’re not used to such behaviour and attitude.”

Related Stories
Teenagers seen smoking, littering, and sleeping outside lift landing area at Block 348 Woodlands Avenue 3
'Samaritan' who provided information on serial killer litter cases to police could be culprit himself
Students allegedly smoke and litter in uniform at void deck -- then get aggressive when told off
More About:
inconsiderate
litter
littering
rubbish