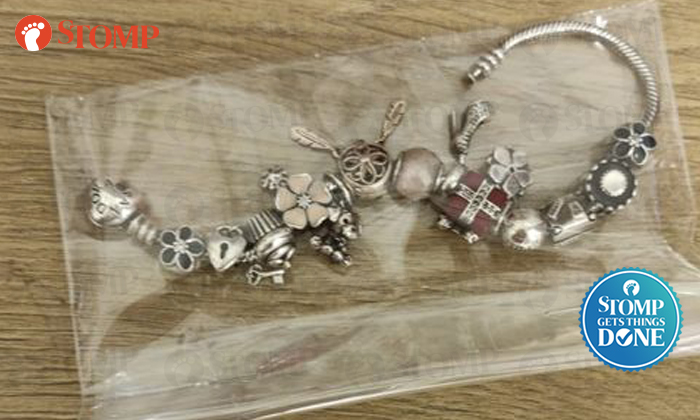 A woman who made an appeal for the return of her Pandora bracelet has been reunited with it.

Stomper Huiwen earlier shared how she lost the bracelet, which has discontinued charms, in the vicinity of Tampines 1 and Tampines Bus Interchange, on June 13.

Huiwen, who offered a reward, said in a June 17 report: "The Pandora bracelet was given to me by family and friends over the past five years.

"It is impossible to replace and I am praying hard to find it, as many of the charms have been discontinued according to Pandora staff."

On June 18, staff from a gift shop at Tampines 1 informed Stomp that they had found the bracelet on Level 2 of the shopping mall.

The shop is known as Gift Greetings, which is located on the same level.

Huiwen has since visited the shop to retrieve her bracelet and shared her joy with Stomp.

She said: "I was elated and overwhelmed when I was informed that someone had found my bracelet, which I didn't expect since a week had passed.

"Heartfelt thanks to the staff who took the initiative to contact Stomp, rather than just leaving it under their lost and found.

"I offered the reward to the staff, but they insisted that the company does not allow it. They declined my offer for a drinks treat too, so I could only thank them.

"I really wish that they would accept the token of appreciation but at the same time, I'm really proud that they returned it not because of the reward promised. Kind people still exist!

"Thank you so much to Stomp and their readers for the help and shares. It's much appreciated!"

Related Stories
Woman offering reward for Pandora bracelet with discontinued charms that got lost in Tampines
Man reunited with MacBook after Stomp appeal -- and kind soul who found it even declines reward
Kim Tian Road resident grateful for clutter cleared: 'Thanks for listening and taking action'
More About:
Stomp gets things done
lost
heartwarming
inspiring