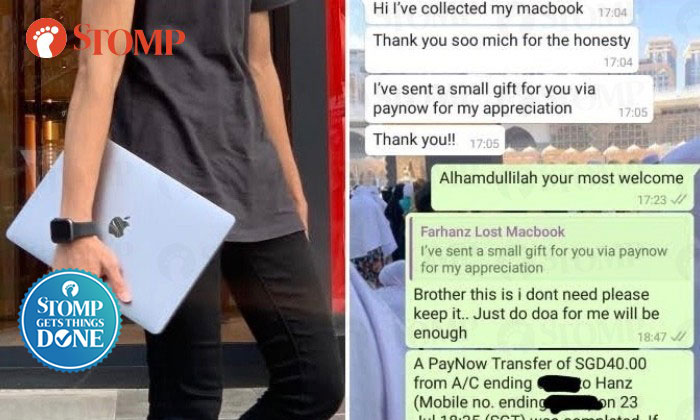 A man was overjoyed to have found his misplaced MacBook Pro after posting an appeal to find it on Stomp.

Stomp had earlier posted a photo of Stomper Farhan's missing laptop on Wednesday (July 22) after he had misplaced it in a car park at Geylang.

After the photo of the laptop was published on Stomp's social media platforms, Stomper AL saw the post and alerted Stomp on Thursday (July 23) that he had found the laptop.

Stomp then linked AL and Farhan up so the latter could retrieve his laptop.

On the same day, AL handed the laptop over to Tampines Neighbourhood Police Centre so that Farhan could collect it later that afternoon.

"Thank you, Stomp, for publishing the online appeal and for all your help," Farhan said after retrieving his laptop.

"I really appreciate it.

"I also transferred $40 to AL as a small token of appreciation and for his honesty.

"AL denied the cash reward and transferred the money back to me.

"He is so kind, the world needs more people like him."

AL also shared he was happy for Farhan: "He got his laptop back! All is good.

"Stomp is a great platform."