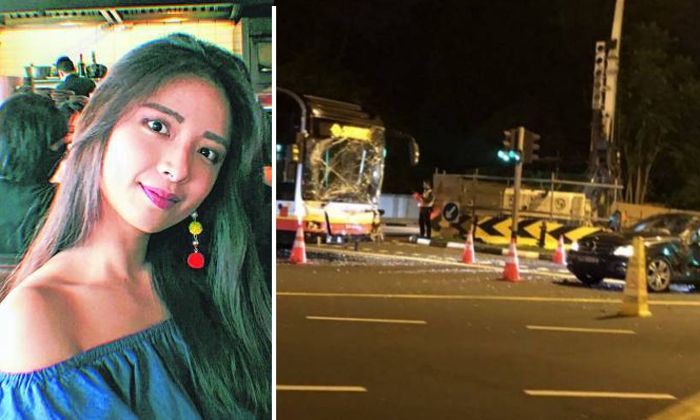 A night of merrymaking for three friends ended tragically when one of them died following a collision involving their car and a bus.

The court heard that Lam, a project manager, and her boyfriend Jake Lau Zhi Wei, 26, had gone to Pine Grove near Ulu Pandan Road on April 21 to celebrate the birthday of Ms Lim's boyfriend.

After the party, which ended past midnight, Lam offered Ms Lim a ride home. The younger woman, who was an assistant brand manager for SK-II, sat in the back while Lam's boyfriend took the front passenger seat.

At the junction of Jalan Anak Bukit and Jurong Kechil Road, Lam stopped her car in the second lane of the three-lane road.

However, when the traffic lights turned green for vehicles travelling straight ahead, she started moving before the right-turn green arrow appeared, DPP Wu said.

She also did not stop the car in the turning pocket but immediately made the right turn towards the PIE.

DPP Wu told District Judge Kessler Soh: "She did so negligently, failing to keep a proper lookout and to give way to oncoming traffic while making a right turn when the traffic light in her direction was only showing green, without the green right-turn arrow."

Mr Thanjavour Rajarm Prabhuram, 43, was driving an SMRT bus in the opposite direction of Jalan Anak Bukit towards Clementi Road at a speed of about 59kmh when he saw Lam's car turning into his path. The bus hit the left side of the car, which spun before coming to a stop.

Lam called the police and an ambulance soon arrived to take Ms Lim to the National University Hospital, where she died of a head injury. Lam and Mr Lau were taken to Ng Teng Fong General Hospital.

In stressing that Lam's negligence was "not insubstantial", DPP Wu urged the court to sentence her to four weeks' jail and disqualify her from driving all classes of vehicles for five years.

Defence lawyer David Nayar pleaded for his client to be jailed for a week and be disqualified from driving all classes of vehicles for two years. He added that she had a clean driving record prior to the incident.