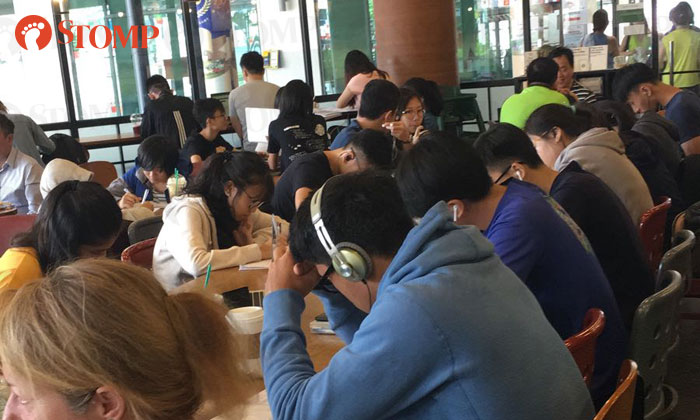 Most students cannot wait for the school holidays to arrive so they can get a much-needed break from academia.

However, in Singapore, many students use their free time to catch up on their studies.

Stomper A thinks that students should just "stay home and study" instead of taking up seats at cafes.

The Stomper was at a Starbucks at Bishan Community Club on Monday (June 11) at about 12.30pm when she saw that almost all the seats were taken up by students.

A told Stomp that she is a consultant and had gone to the cafe to meet with a client.

"After five to 10 minutes of waiting, it looked like nobody was going to leave soon," she said.

"They had all their notes and laptops with them."

In the end, she gave up waiting and went to her client's home for her meeting.

She said that this is the third time she has visited the outlet to experience the same thing.

"I feel like for work, it's okay but students can study at home or at school," she said.

"When I was a student, my friends and I would go back to our Junior College to study."

In similar instances, Starbucks has commented on such complaints with the following response:

"Maybe Starbucks can enforce no studying during peak hours like during lunch," suggested A.

"These students buy $5 drinks and park at Starbucks for five hours."

Related Stories
More customers frustrated by students studying at Starbucks outlets: "More like library than cafe"
Students hogging Starbucks seats: Woman asks "what do you want us to do about it?"
Customer enters CCK Starbucks and exits again: "Why do students have more rights than normal patrons?"
More About:
starbucks
students
studying
inconsiderate