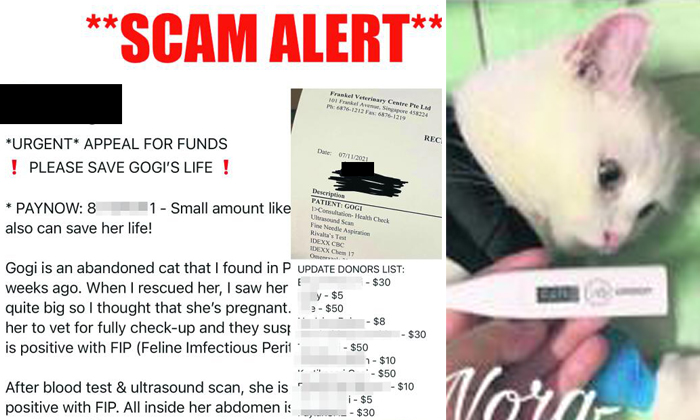 A 20-year-old woman allegedly cheated around 60 victims of money by soliciting donations for a stray cat that she claimed needed medical treatment.

However, it was found that there was no such cat being treated.

The police said they received a report on Tuesday (Nov 16), claiming that a woman was soliciting donations via crowdfunding on social media.

"The woman had purportedly solicited donations from victims for the purpose of providing medical treatment to a stray cat that was taken to a local vet," police added.

"It was later discovered that there was purportedly no such cat being treated.

"The woman had also allegedly forged a receipt to make it seem like there were medical bills paid for the stray cat."

Through follow-up investigations, officers from Bedok Police Division established the woman's identity and arrested her.

Preliminary investigation revealed that a total of about 60 people had responded and made donations to the cause.

Another 20-year-old man is also assisting with police investigations, which are ongoing.

The offence of cheating carries a jail term of up to 10 years and.or a fine.

Those with any information relating to such crimes can call the police hotline at 1800-255-0000, or submit it online at www.police.gov.sg/iwitness. For urgent police assistance, please dial '999'.