Wild boars found trapped along Sime Road, trampling on each other and bashing against cage 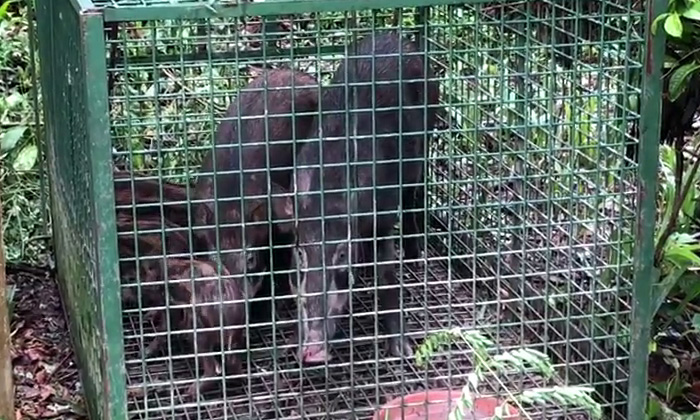 A family of wild boars were found trapped in a cage along Sime Road on Oct 7 at about 3.30pm.

They were found in a forested area beside the road which was located outside the Central Catchment Nature Reserve.

In the video, they were seen trampling over each other and bashing against the cage.

"Found these wild boars trapped in a cage just outside a nature reserve today," said the caption.

"The trap has been removed and investigations on who laid the trap are ongoing."

"Acres received a call from a member of public at 3:30pm on Oct 7 regarding a trap with two adult pigs and three piglets in a big trap by roadside along Sime Road.

"Acres arrived around 4pm and released the pigs who were very stressed from traffic beside, trampling on each other and bashing against cage, desperately trying to get out.

"It was heartbreaking to see this, and so many things could have gone wrong if the piglets got trapped halfway when the trap door is closing.

"There were some corn food bait leftovers which looked relatively fresh.

"This indicated that the wild boars could have gotten trapped late that morning or early afternoon."

She added that they took about 15-20 minutes to undo the trap.

"We had to wrap the cage with a blanket so that the wild boars will not be stressed when they see us trying to open the cage.

"We then had to climb on top of the cage in order to undo the door.

"The wild boars quickly ran out into the forest when we opened the cage.

"We would also like to encourage members of the public to call us when they see such incidents, such as in this case."

Members of the public can contact Acres via their 24-hour Wildlife Rescue Hotline at 9783 7782.

"We responded to the feedback with Acres and found five wild boars (two adults and three piglets) in a cage trap.

"The boars were released into the forest and the trap removed.

"AVA is investigating the case.

"In Singapore, it is an offence to kill, take or keep any wild animal without a licence from AVA.

"Offenders, upon conviction, can be fined up to $1,000 per wild animal, and the forfeiture of the wild animal.

"Members of the public who have information on this case (e.g. photographic or video evidence, witnesses, etc) should report to AVA at 6805 2992 or via our online feedback form.

"All information provided will be kept strictly confidential."