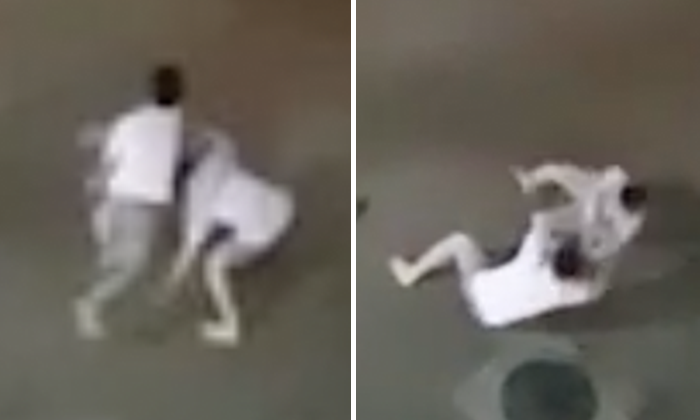 Two men got into a fight on a field outside Golden Mile Complex on Tuesday (Nov 7) at around 8pm.

During the brawl, one of the men even threw his adversary onto the ground with a move resembling a judo throw.

A video of the fight was uploaded online, showing the two in a scuffle, with each attempting to throw the other onto the ground.

As the fight continued, one of the men got the advantage and managed to mount his opponent, locking down his movements.

At this point, the fight was intervened by several passersby, separating the two men.

The witness added that the fight lasted for around 10 minutes before the police officers arrived.

In response to media queries, a Police spokesman said that the Police were alerted to the incident at 7.08pm, and a 55-year-old man was conveyed conscious to Tan Tock Seng Hospital.

Related Stories
Police called in after scuffle breaks out outside St James Power Station
Early morning drama as fight breaks out among several men along Jalan Sultan
Woman's eyeball popped out after getting jabbed by colleague's stiletto heel during fight
More About:
fight
dispute
Golden Mile