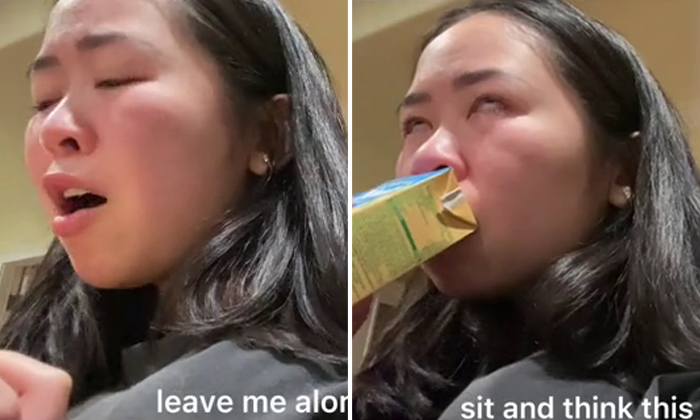 There has always been a stigma surrounding the pursuit of an arts career compared to one in the Science, Technology, Engineering, and Mathematics (STEM) industry, especially in Asian and more conservative households.

A Vietnamese student in the United States recently shared a TikTok video of her parents lecturing her about her career path while she was having dinner.

The video, posted on Monday (Apr 11) with the caption "live laugh love", has since garnered more than 12 million views.

In the clip titled "Point of view: You're trying to eat dinner but you are an art major in an Asian household", TikToker @kaitlynnbui is seen crying over dinner as her mother chides her.

Kaitlynn's mother can be heard asking how she plans to financially support herself after graduation, to which Kaitlynn jokingly replies, "I'm gonna find a rich husband."

Her mother then retorts, "You're short and small", "You can't do anything," and "You have nothing in comparison to others."

Kaitlynn, still in tears, responds by telling her parents to leave her alone and that she would "figure it out."

However, her mother continues by telling her that "it's very hard to survive with this career." She later adds, "Sit and think this through. Wake up, stop dreaming, live with the reality," which causes Kaitlynn to roll her eyes.

Kaitlynn's deeply relatable video has drawn an outpouring of love and support, with many netizens sharing similar experiences with their own parents. They also encouraged her to continue chasing her dreams.

One TikToker said, "This hurt me to hear. Same, girl. Trust me, stick to your dream! You owe them nothing and yourself everything!"

However, there were those who felt empathetic toward Kaitlynn's parents as well.

One user commented, "It's projection. They probably didn't have as much choice in their careers and refuse to acknowledge the variety of modern-day careers now."

Another added, "Their only intention is for us to be well-off so we don't struggle but man, their execution terrible to (the) point we never feel good enough for them."

On Wednesday (Apr 13), Kaitlynn posted a follow-up video that shows her apologising to her parents for "doing wrong" and reacting badly.

She wrote in the caption: "I'm graduating next month but I still don't know what the future holds for me, so when my parents asked me the question that I've been asking myself over and over, I got defensive and reacted poorly. I love my mom and dad."

i’m graduating next month but i still don’t know what the future holds for me, so when my parents asked me the question that i’ve been asking myself over and over, i got defensive and reacted poorly. i love my mom and dad

In the video that has been viewed over 440,000 times, Kaitlynn's mother can be heard explaining, "When we ask you, we want you to tell us your plans so we can see if we can help you or not."

Her mother says, "From the beginning, I told you it's very hard to find a job, but if you want it, we'll still support you."

She also points out how she and Kaitlynn's father had even bought Kaitlynn the new equipment that she wanted.

She then clarified that while she does not need Kaitlynn to have "high social influence or make a ton of money", Kaitlynn still needs to be able to support herself and her family.

"Do you get it? It's not that I don't believe in you," her mother adds.