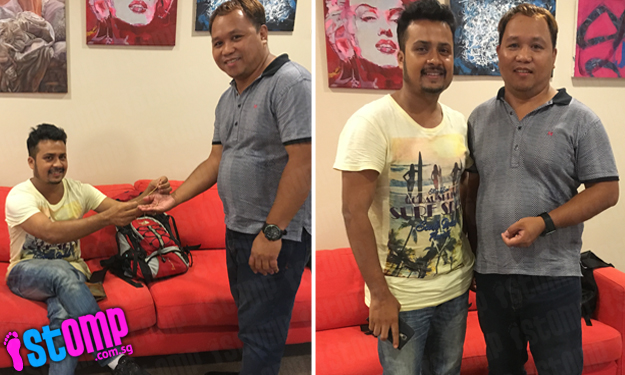 Stomper Edgardo has been reunited with a priceless gold chain that he had earlier lost, after Stomper Habib came across his appeal to locate the missing item on Stomp.

Edgardo, 39, had written in to Stomp about losing the gold chain on Sunday (April 25) in a report dated April 26 and offered a $300 reward for it.

He had been on the train and going towards Sengkang when he noticed that the gold chain he wore on his neck was missing.

The chain has been in Edgardo's family for 33 years and holds great sentimental value. His father had given it to him earlier in February this year.

Edgardo said, "I read Stomp everyday and decided to try my luck in posting a report."

On Wednesday (Apr 27), Stomp received a photo of a gold chain from Stomper Habib via WhatsApp. It looked to be the same one that Edgardo had lost.

After verifying with both parties that it was the same chain which had a special 'S-lock', Stomp arranged for them to meet at our offices at SPH News Centre that evening.

Habib, 27, said that he had found the chain on the floor of a cafe in City Square Mall, which is located near Farrer Park, on Sunday.

He then asked around to see if it belonged to anyone and decided to hold onto it when nobody claimed it.

After seeing Edgardo's report on Tuesday, he realised he had found the chain in question.

Habib said, "I go on the Stomp mobile app all the time and happened to see the article about the chain. When I saw the part about the chain's history of 33 years, I felt something."

At the Stomp office, Habib returned Edgardo the valuable gold chain and received a $300 reward in return for his kind deed.

A grateful Edgardo said, "Now I can finally answer to my father. Highly appreciated. More power to Stomp!"

Both men were full of thanks to each other and to Stomp. They also exchanged contact details and left the premises with a newfound friendship.

Stomp would like to thank both Edgardo and Habib for taking the time to come down to our offices. We are also happy to be of help in reuniting Edgardo with his precious gold chain.

This is the second recent case where Stomp has helped an owner reunite with his/her lost belonging.

Back in February, a woman's laptop was returned to her after she left it behind at Orchard ION thanks to a Stomp posting.

Stomper offers $300 reward for gold chain lost on MRT: 'It was given to me by my father'

Facebook user who found woman's lost laptop: Stomp will be arranging for them to meet

Related Stories
The happiest of endings for man who lost priceless gold chain and kind soul who saw his Stomp report
More About:
lost