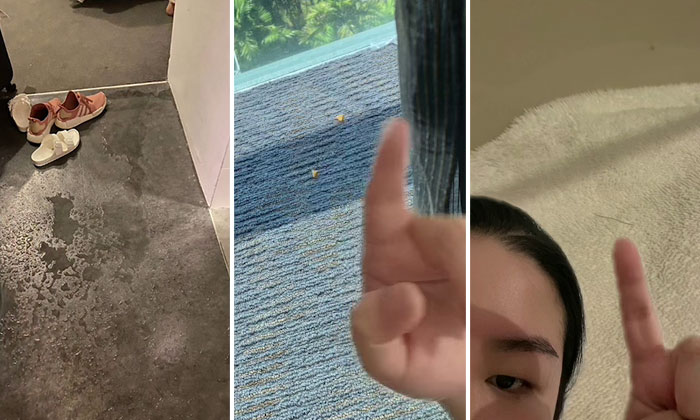 She booked what she thought was a reasonably priced hotel room near Orchard Road.

What she got included a dripping aircon, suspicious strands of hair, chips lying around, and an odour that staff gave up trying to get rid of.

All of which meant multiple room changes.

The woman, Rachel, described her experience in a TikTok video.

She said she did not see bad reviews when she booked two rooms in the hotel, but just before the trip to Singapore, she did. There was even one that described it as the worst hotel stay ever, something she agreed with after her own experience.

She said that when they arrived, the staff were unfriendly, and one of the rooms was not ready.

In the one that was, the air was damp and there was a “sour” smell.

They switched on the aircon, left their luggage there, and went out for the day.

When they got back in the evening, the floor was wet from a dripping aircon.

Staff told them they would move them to another room.

Meanwhile their second room was ready, and there she points to what looks like chips lying on the floor.

In the replacement room, among other issues, there was such a strong smell of smoke that the guy the hotel sent to fix it agreed that the room freshener spray he brought wouldn’t help much.

She said the hotel claimed it didn’t have any more vacant rooms to move them to.

But after she complained to the travel agent who had booked the rooms, the hotel did find another one.

And there she says they found hair on the bed and on a towel. The latter, according to her, looked like pubic hair -”so gross”.

She tried to mask the name of the hotel in the video. But netizens identified it as the Hotel Chancellor@Orchard in Cavenagh Road.

A quick Google search seemed to show that there were rooms going there for as low as $125.

Rachel disagreed with those who said she shouldn’t expect more at the price she paid. She said she would still expect a clean room. Fair point.

AsiaOne quoted a spokesman of the hotel as saying that it accepted “full responsibility for the shortfall in service”.

It blamed an industry-wide manpower shortage, and said the situation was made worse by some of its housekeeping staff falling ill.

The hotel said it was trying to reach out to the guest.