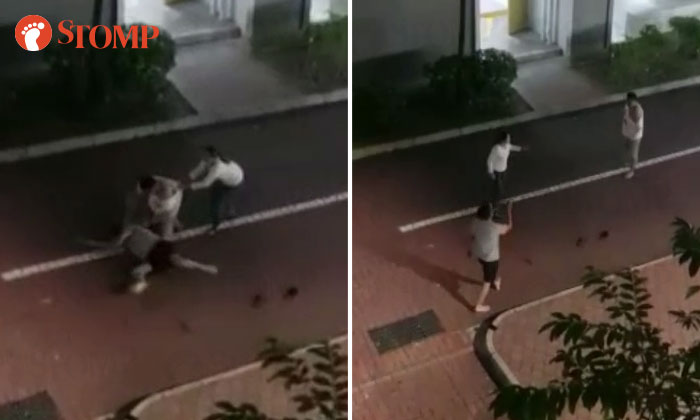 Some residents at Wellington Circle in Admiralty were woken up by a fight between two men in the early hours of Sunday morning (Aug 25).

Stomper Sheena alerted Stomp to the incident and shared a video she took from her home.

In the video, one man is seen lying on the ground while the other rains blows upon him.

A woman manages to separate the duo and one of the men's shirt is torn around the collar.

It is unclear what the men were arguing about.

"I was about to sleep at about 1am when I heard screaming from down below," Sheena said.

"I only started recording the fight after it had started but it lasted about 10 minutes.

"I saw one of the men coming out from the lift lobby at the carpark at Block 502 already bleeding from his face.

"Two ladies were there to stop the fight before one man retreated under the block and the other went back to the carpark."

Related Stories
4 women arrested for public nuisance after catfight at Balestier bak kut teh shop
2 women fight and scream at each other until 1 gets pushed out of train
Man rains blows on GrabFood delivery guy at Woodlands coffee shop
More About:
fight
argument
brawl
punch
bloody
blood