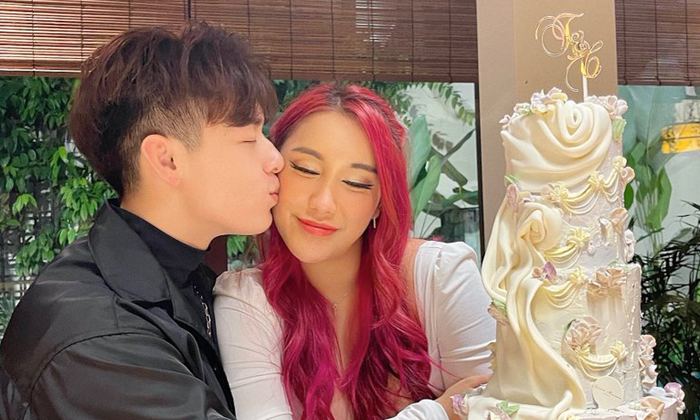 Former OnlyFans creator Titus Low has known Malaysian influencer Cheryl Chin for less than a month, but that did not stop him from proposing to her.

In a surprise announcement on his social media accounts, the 22-year-old revealed that he asked Chin, 21, to marry him just six hours after they officially started dating.

In a video posted last Friday (June 17) on their new couple YouTube channel, Titus & Cheryl, they answered questions about their relationship.

They met at influencers Jianhao Tan and Debbie Soon's third wedding anniversary celebrations in May, which Chin said was "a sign from the universe" and "meant to be".

After chatting on Instagram and going on a few dates for a fortnight, they decided to go official.

That night, they were having supper with friends at 4am when Soon jokingly suggested that they get engaged.

Low laughed as he said: "Go all the way."

Chin added that they were both "a little bit too spontaneous" and she was in a "YOLO mood", using the abbreviation of "you only live once".

Low also said: "Things felt right, so that's why we decided to go ahead."

In the seven-minute video, they clarified that it will not be a shotgun wedding.

Chin, who is an influencer under Tan's Titan Digital Media, said she fell in love with Low because of his patience and his piano playing.

In a separate video that Low uploaded on his own YouTube channel, titled I Guess I Am Engaged?, he said: ""I didn't have to try, you know? I just gradually clicked with her and I felt like it's a genuine connection. I know she's the one because I feel very comfortable with (her), I didn't feel forced with her."

Soon helped to organise a surprise engagement party the next day, with the couple dressing up in bridal wear.

Low, who is awaiting trial after being charged with transmitting obscene materials by electronic means last December, said the marriage could be "a new start, a new chapter" for him.

He faces up to 21 months in prison if convicted.