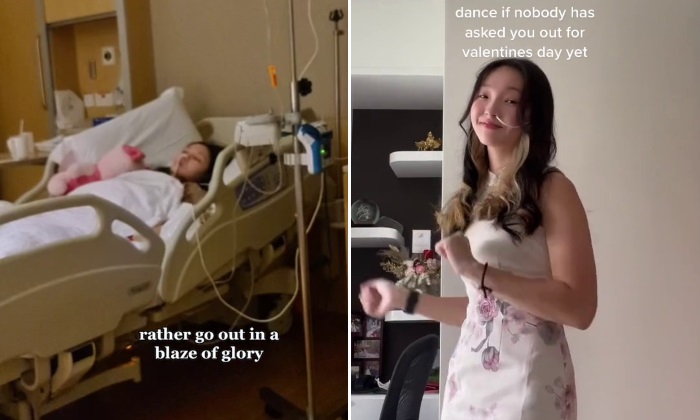 For 18-year-old Tammie Ong, long stares from strangers when she removes her mask in public is something she deals with on a regular basis.

The student, who was diagnosed with four chronic illnesses at 17, uses a feeding tube to receive proper nutrition, and carries around medical equipment to facilitate this process.

She said that while it is something she is gradually getting used to, stares from members of the public make her uncomfortable at times.

But that's just one of the many things she has had to get accustomed to after her diagnoses.

Ms Ong found out that she had superior mesenteric artery syndrome (SMAS) in 2021, and discovered she also had gastrointestinal dysmotility, postural orthostatic tachycardia syndrome (POTS), and small fibre polyneuropathy (SFN) earlier this year.

Complications with her health, however, stretch back to when she was in primary four, when she was often in and out of hospitals as she would have frequent stomach issues. But there was no conclusive indication of her current conditions then.

In November 2021, Ms Ong experienced a wave of issues, including vertigo, pounding headaches, and constant nausea.

It got to a point where she could not keep her food down, and would throw up every time she ate something. Her dizzy spells also caused fainting, and she was eventually admitted to the emergency ward.

There, she went through multiple stages of tests and screenings, and was diagnosed with SMAS. It is a digestive condition where part of the small intestine is compressed, causing partial or complete blockage of the intestine, which then led to her using feeding tubes to receive nutrition.

Her other three chronic illnesses were discovered during a routine hospital visit in March 2021.

The experience of going through multiple painful procedures and tests has traumatised her, she said, to an extent where she cannot bring herself to enter the rooms she had previously undergone procedures.

Navigating her diagnoses of the four chronic illnesses has been frustrating, she said, and daunting, as her condition is rare.

Even so, she is immensely grateful for how much progress has been made.

“Not being bedbound and being able to stay at home instead of at the hospital is something I’m thankful for,” she said.

While she remains positive, she struggles to cope with the drastic change in her lifestyle.

The student, who would regularly attend ballet classes and go on runs, said that having POTS halted her active lifestyle as she would get lightheaded after being on her feet for extended periods of time.

This has been frustrating, but she believes her parents were hit harder by it than she was.

“Having to see me suffer and in pain hurt them a lot,” she said.

Ms Ong added that her family helped her through some of the most difficult times, with her parents taking her to see multiple doctors and going with her on hospital visits.

She would turn to her siblings when she felt at her worst, said the youngest of three, adding that her elder sister and brother were the ones who could most understand how she felt.

Despite having found a strong support system in her family, she keeps most of her troubles to herself.

“I don’t like to burden other people,” she said, “and my problems should be my problems.”

Instead, she has found solace in sharing her journey online, through social media platforms like Tiktok and Instagram.

Going public about her condition was a leap of faith, she said, as she had to be mentally prepared for hate comments from netizens.

Her candid posts online have however garnered her immense support, amassing thousands of followers over the past few months.

The platform she has now has helped her to achieve her dream of hosting a fundraiser for those in need, which was a goal she set for herself in secondary school, before she found out about her diagnoses.

Ms Ong has since hosted two fundraisers, and plans to continue hosting more fundraisers for different organisations and charities in Singapore.

Related Stories
Woman who had stroke while 7 months pregnant: 'It felt like my brain was going to explode'
Singapore girl wins over TikTok by sharing her experiences and struggles with alopecia
8-year-old boy completes dream of cycling 119km to raise funds for children's cancer research
More About:
medical condition
illness
teen
TikTok