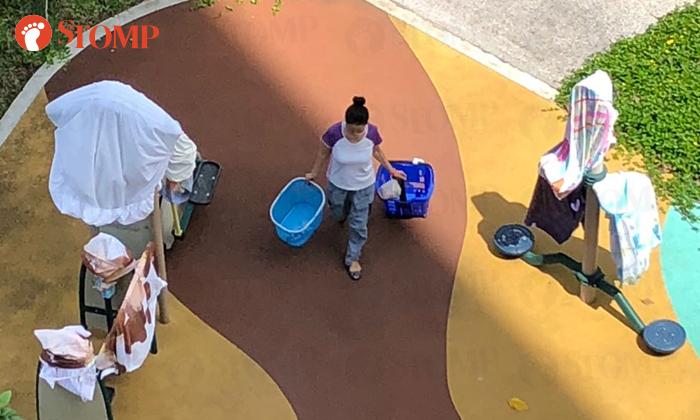 A Tampines resident has taken to using a fitness corner to dry her bedsheets.

Stomper Vino said that he first saw this two months ago.

Since then, he has witnessed the fitness corner equipment at Tampines Avenue 1 being covered with bedsheets several times.

The most recent time he saw this was on Jan 18 at around 10am, which he says is the sixth time he has seen her hanging up her bedsheets to try.

The woman was seen bringing along two baskets with her and attending to the bedsheets at the fitness corner in photos and a video that Vino sent.

Vino told Stomp, "A few residents actually went to talk to the lady a while back."

However, according to the Stomper, "nothing changed" as the woman is still doing it to this day.

"Residents cannot utilise the fitness corner due to her selfish act," added Vino.

However, this is not the only instance of someone making use of the fitness corner to dry their clothes.

On Jan 6, it was reported on Stomp that a similar incident happened at a fitness corner at Queen's Road, where articles of clothing had even been spread out on benches to dry.